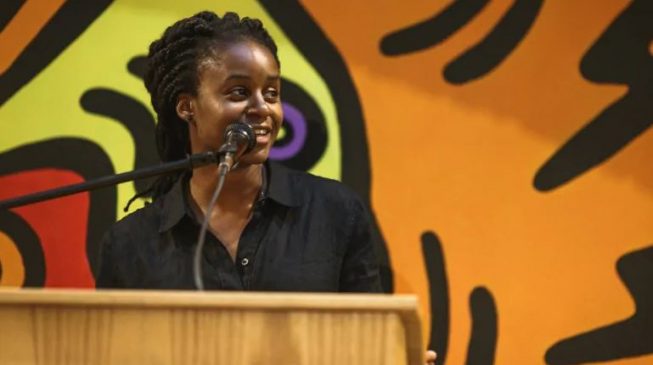 Recently, Zulfat Suara, a Nigerian-American, emerged as the first Muslim lawmaker in Tennessee in the United States, after making it into the runoff of a Nashville council at-large election. Her victory at the poll was not only a win for the Nashville community, but also for Nigeria where she lived until 1993 when her husband won the Vanderbilt fellowship.
On Tuesday, Uzoma Asagwara, a Nigerian-Canadian, set a record as the first black person elected to the Manitoba legislature to represent Union Station constituency. Her victory in the Manitoba general election broke a 150-year record in the Canadian parliament as she, alongside Jamie Moses and Audrey Gordon, became the first elected black members of the Manitoba legislature .
ADVERTISEMENT
‘VICTORY IS LONG OVERDUE’
Asagwara, a first-generation Canadian whose parents are Nigerians, says the representation of blacks in the Manitoba legislature is long overdue. In an interview with City News, she said it was time for elected officials to represent and reflect the communities they serve.
“I am the first black and queer person ever elected to the Manitoba legislature. There has never been a black person ever elected before to the Manitoba legislature,” she said.
“It (the victory) means that in this constituency and the greater Manitoba, it is saying it is long overdue that we have our elected officials representing and reflecting the communities that they serve. We are going to rejoice tonight, we are going to reach out to family, friends, and community and tomorrow we get right straight to work.”
COMMUNITY ACTIVIST AND VOLUNTEER
Asagwara is a lover of community activities and volunteering.  In 2014, she founded Queer People of Colour Winnipeg, a Winnipeg-based initiative that creates safer spaces for and increases the visibility and representation of queer and transgender people of colour. She also served as a human rights advocate in the constituency for nearly two decades in Winnipeg, where she lived, worked, and studied.
She has worked alongside marginalised and targeted demographics to ensure all voices are heard and fought for in spaces where critical decisions are made. In an interview with CTV News, the 39-year-old Nigerian-Canadian said she and her team seek to ensure that residents of Manitoba have access to good healthcare, jobs, education and affordable housing.
“I feel amazing, this is an incredible moment for our team, our communities and union station as a whole. I have a record in terms of serving communities in Union Station and beyond as a pyschiatric nurse, as a community specialist, as a grassroots community organiser. I am very excited as someone who has been investing in community for a long time and working alongside many communities…. We want to make sure that all Manitobans have access to a really good healthcare, good jobs, good education and affordable housing,” she said.
PSYCHIATRIC NURSE AND ENTREPRENEUR
Before she was elected as a member of the legislative house, Asagwara worked as a psychiatric nurse specialising in adult and youth mental health and addictions. According to her LinkedIn profile, she is a consultant, public speaker, entrepreneur, community advocate, and registered psychiatric nurse with the government of Manitoba. She is also a member of the Women’s Health Clinic board of directors.
‘RESPONSIBILITY TO BE A ROLE MODEL’
Asagwara considers herself a role model to inspire the youth in various communities. She mentors young athletes in downtown Winnipeg, among other places, and she speaks to them about the importance of education, living authentically and the importance of pursuing one’s dreams.
“I believe I have a responsibility to be a positive role model for folks who may not ever think that they can be black … and queer, and achieve the things that they want to, or even dream the things that they dare to dream,” Asagwara told CBC News in 2017.
ADVERTISEMENT
ART LOVER OR ATHLETE? BOTH!
The Nigerian-Canadian is both an athlete and a lover of art. As a passionate art lover, she is an active board member of the Plug-In Institute of Contemporary Art. She also collaborated with many community partners to host events highlighting and celebrating local talent and showcasing artists from around the world. She is also a lover of basketball. She is a former University of Winnipeg Women basketball player and former member of the Canadian National Basketball team.
Asagwara is the first black queer member of the legislative assembly in the province, building on previous community work with Queer People of Colour Winnipeg. She rode to victory on the platform the New Democratic Party (NDP).