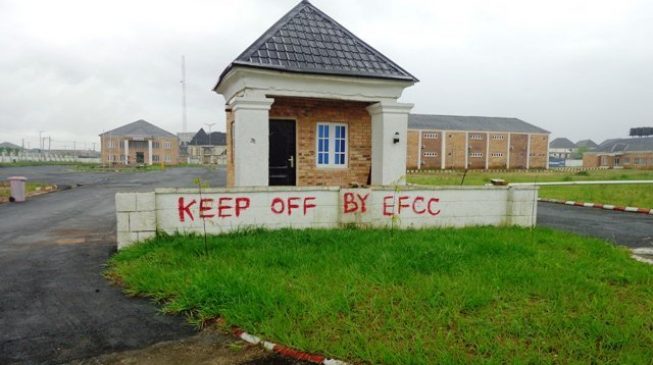 A federal high court in Rivers state has ordered Rochas Okorocha, former governor of Imo, not to sell the properties under investigation by the Economic and Financial Crimes Commission (EFCC).
J.K, Omotosho, the judge, gave the ruling on Friday.
ADVERTISEMENT
The EFCC had obtained a court order for the interim forfeiture of some assets traced to Okorocha.
In a statement on Saturday, Wilson Uwujaren, EFCC spokesman, said Omotosho gave the order while vacating the interim order for the forfeiture five properties owned by Okorocha and his family.
The properties are Rochas Foundation College, Owerri; All-in-1 shopping mall; East High Academy; East High College, and Royal Spring Palm Hotel & Apartments.
According to Uwujaren, the registered trustees of Rochas Foundation College, All-in-1 Limited, Royal Spring Palm Apartments Limited, as well as registered trustees of Women of Divine Destiny Initiative and Uluoma Okorocha Nwosu had challenged the interim forfeiture order through five separate motions on notice, asking the court to vacate it.
He said the case was followed with further counter affidavits until the court “issued a consequential order vis-à-vis the nature of the properties involved”.
ADVERTISEMENT
“The Commission is studying the consequential order of court,” he added.