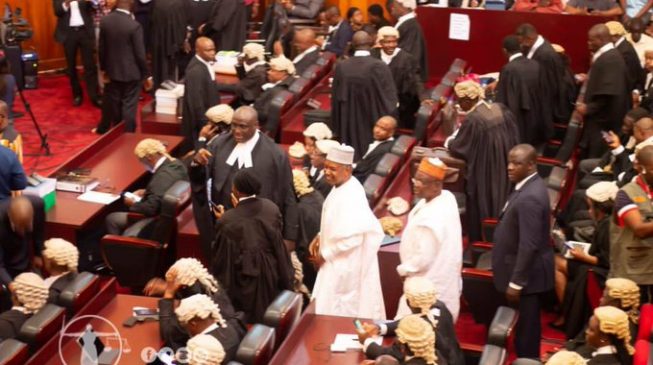 In what a lawyer described as the longest court sitting in the history of Nigeria, the presidential election tribunal spent over eight hours delivering judgement on the petition Atiku Abubakar filed to challenge the victory of President Muhammadu Buhari in the 2019 general election.
Atiku ran on the platform of the Peoples Democratic Party (PDP) while Buhari contested under the All Progressives Congress (APC).
ADVERTISEMENT
Among the grounds of his petition was that Buhari was not qualified to contest for president, and that he garnered more votes than the APC candidate, citing the server of the Independent National Electoral Commission (INEC).
But the tribunal declared that Buhari was “eminently qualified” to contest the presidential election. It also ruled that the petitioners failed to prove that INEC transmitted results electronically.
In the end, it was a unanimous judgement against the PDP candidate as the court dismissed his petition for lack of evidence.
ADVERTISEMENT
Click here to download the tribunal’s verdict.