EXCLUSIVE: Buhari directs Osinbajo to seek approvals for agencies under him 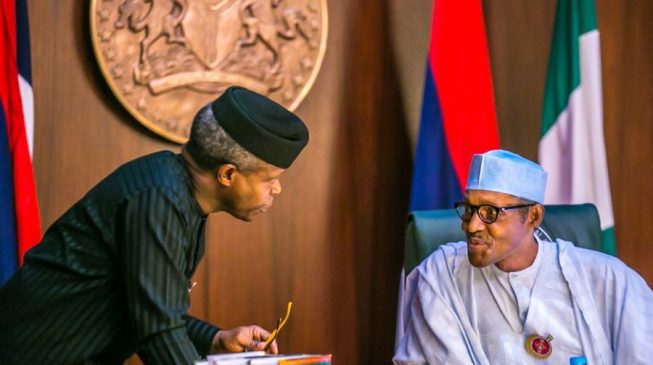 President Muhammadu Buhari has directed Vice-President Yemi Osinbajo to, henceforth, seek presidential approvals for agencies under his supervision, TheCable can report.
Under the laws setting up the agencies, the president is empowered to give final approvals but TheCable understands that the provisions were not followed during the first term.
ADVERTISEMENT
TheCable learnt that the directive to follow due process was issued via a presidential memo on Monday.
Currently, Osinbajo is the chairman of the governing boards of the National Emergency Management Agency (NEMA), the National Boundary Commission (NBC) and the Border Communities Development Agency (BCDA).
He is also the chairman of the board of directors of the Niger Delta Power Holding Company (NDPHC), a limited liability company owned by the three tiers of government.
In addition, the vice-president chairs the National Economic Council (NEC), a constitutional body made up of state governors and key federal government officials, as well as the National Council on Privatisation (NCP).
With the new memo, the vice-president will now have to seek approvals for contract awards, annual reports, annual accounts, power to borrow, and power to make regulations, among other key functions.
On Monday, Buhari appointed and Economic Advisory Council (EAC) and disbanded the Economic Management Team led by Osinbajo.
Buhari had appointed Osinbajo chairman of EMT during his first term, although the position was held my ministers of finance under previous administrations.
There are unconfirmed reports that NEMA and National Social Investment Programme (NSIP) will now be moved from the office of the VP to the newly created ministry of humanitarian affairs, disaster management and social development, headed by Sadiya Umar Farouq.
By law, the vice-president is the chairman of NEMA, NBC and BCDA but the acts also state that presidential approvals are needed for some key decisions and actions.
Sections 13, 14, 16, 17, 18, 19 and 24 of the NEMA act provides that “funding, expenditure, contract awards and regulations” must receive presidential approval.
Sections 24, 25, 27, 28 and 33 of the NBC act empower the president to direct on annual reports, annual accounts, power to borrow and power to invest.
Under the BCDA law, the president also has similar powers.
ADVERTISEMENT
“Suffice it to say the president has finally taken control of his government,” a minister, who confirmed the development, told TheCable.
Editor’s note: This story has been updated with more facts.