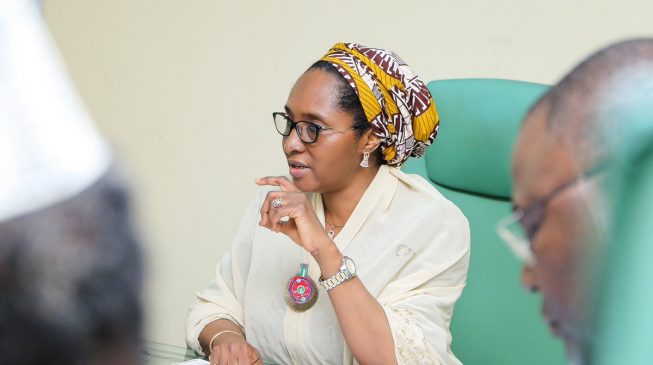 The federal government says it will propose a sum of N9.79 trillion to the national assembly as total expenditure in the 2020 budget.
The amount which represents an increase of 9.75 percent over N8.916 trillion spending for 2019, is based on the projection of a proposed revenue of about N7.64 trillion and a total proposed fiscal deficit component of about N2.142 trillion.
ADVERTISEMENT
Zainab Ahmed, minister of finance, budget and national planning, disclosed this in Abuja at a public consultation forum with civil society groups and agencies on the draft 2020-2022 medium term expenditure framework (MTEF), on Tuesday.
She said the budget will be proposed based on the assumption of an oil production capacity of 2.18 million barrels per day, crude oil price of $55 per barrel, against $60 per barrel last year, and exchanged rate of N305 to the dollar.
The minister of finance said debt service is projected to increase from N2.14 trillion in 2019 to about N2.45 trillion; statutory transfer of N526.46 billion, from N502.1 billion in 2019, and sinking fund of N296 billion, from N110 billion.
She also said recurrent non-debt appropriation was put at about N4.57 trillion against N4.39 trillion in the 2019 budget.
She added that inflation rate for the year is projected at an average of 10.81 percent, with nominal consumption figure of about N122.75 trillion and nominal gross domestic product of N142.96 trillion. The GDP growth rate is put at about 2.93 percent.
Ahmed said a breakdown of the non-debt proposal includes ministries, departments and agencies (MDAs) personnel cost of N2.675 trillion; government-owned enterprises (GOEs) personnel costs (N218.8 billion); overheads for MDAs (N280.3 billion); overheads of GOEs (N146.14 billion).
She provided details of the capital expenditure to include capital supplementation (N234.2 billion); statutory transfers for capital expenditure (N289.1 billion); capital allocation for special intervention programme (N150 billion); MDAs capital expenditure (N827.3 billion).
On the issue of deficit financing for the 2020 budget, Ahmed said the government plans to mobilise additional financing from the sale of government property, proceeds from privatisation, sale of non-oil assets, multi-lateral and bilateral project-tied loans and new foreign and domestic borrowings.
She said the draft MTEF showed the country was facing significant medium-term fiscal challenges, including revenue generation and rapid growth in personnel costs.
The minister said the federal government will implement key reforms under the strategic revenue growth initiative to boost revenue collection and expenditure management.
She said the government has taken steps to block leakages in the system, through an October deadline given by President Muhammadu Buhari for all MDAs to implement the Integrated Personnel Payroll System (IPPIS).
ADVERTISEMENT
Ahmed added that workers in MDAs that fail to move to the IPPIS platform may not be paid their salaries from October.