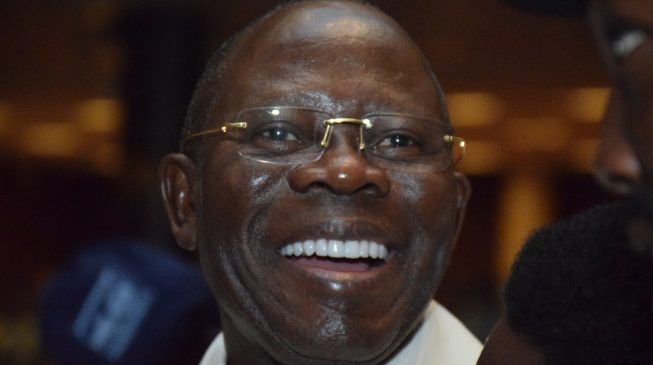 Adams Oshiomhole, national chairman of the All Progressives Congress (APC), says losing an election is not the end of one’s political career.
Oshiomhole was reacting to the decision of the Peoples Democratic Party (PDP) and Atiku Abubakar, its presidential candidate, to challenge the judgment of the presidential election petition tribunal at the supreme court.
ADVERTISEMENT
The tribunal had dismissed the petition filed by the PDP and Atiku challenging the victory of President Muhammadu Buhari in the last presidential election.
Speaking with journalists at the state house after a meeting with Buhari on Thursday, Oshiomhole said he is confident that Atiku would lose even if he goes to the world court to challenge Buhari’s victory.
He said the tribunal had trashed all the evidence and issues raised before it and that there was nothing else left to examine.
“We as a party we are confident that if it is within the Nigerian law for the PDP to go even to the world court, we will meet them there, ” Oshiomhole said.
“The supreme court of Nigeria is not that of the PDP or the APC. The supreme court is governed by law and it’s to interpret the evidence before the court of appeal.
“They are not at liberty to introduce new issues, neither can they bring in new witnesses.
“So, if it is what I heard yesterday, which I believe you also heard; thanks to the media, most Nigerians were detained for eight hours listening to arguments of the judges one after the other.
“Even though we thought it was getting longer and longer, we realised that they tried to deal with the issues raised, even the ones you and I as laymen will consider inconsequential. They dealt with each of them, trashed them and arrived at a conclusion.
“So, I don’t want to sound arrogant. Yesterday (Wednesday), I said that I hoped this whole contest is about Nigeria, who actually won the election and both parties were committed to building Nigeria.  It’s not about who should be given the key.
“Now, this has been resolved and it is time to queue behind the winner and move on. Our winner is the best example that losing an election is not tantamount to the end of your political life. He lost three previous elections,  and today he is the president.
ADVERTISEMENT
“President Buhari is now ready to meet defeated Atiku Abubakar at the supreme court.  The APC is ready to meet the PDP at the supreme court. Adams Oshiomhole is ready to meet my brother, Secondus, at the supreme court; and he will take second and I will take first, Isha Allah.”