Magu: Osinbajo did NOT send EFCC after Adoke 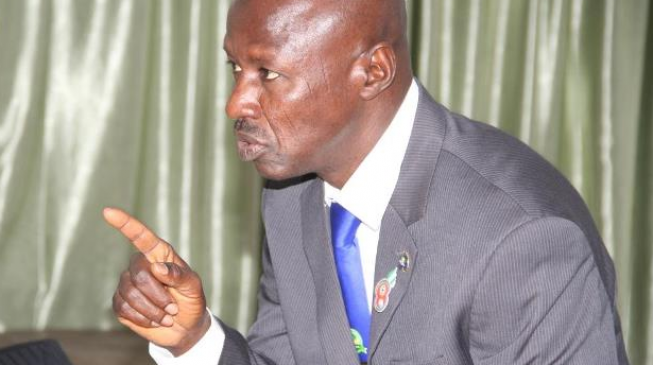 Ibrahim Magu, the acting chairman of the Economic and Financial Crimes Commission (EFCC), has denied that Vice-President Yemi Osinbajo used him to victimise Mohammed Bello Adoke, former attorney-general of the federation.
In his memoirs, “Burden of Service: The Reminiscences of Nigeria’s Former Attorney-General”, published by Clink Street Publishers in London and New York and now on sale in Nigeria, Adoke alleged that Osinbajo, Senator Ali Ndume and Mohammed Abacha used the EFCC chairman to hoodwink him and implicate him in the OPL 245 bribery scandal.
ADVERTISEMENT
Adoke said he had helped Magu back to reckoning in the EFCC after he was allegedly signed after the removal of Nuhu Ribadu and that if he was a indeed corrupt person as being portrayed by the commission, he would have asked Magu for favours.
In a strong-worded response issued on his behalf by Wilson Uwujaren, the EFCC head of media and publicity, Magu said he is alarmed at the “brazen attempt” by Adoke to “rewrite history and portray himself as victim of persecution”.
The statement read: “Specifically, he claimed in Chapter 8 of the book, that Magu was recruited by Prof. Osinbajo to hound and persecute him despite, as he claimed, his role in reinstating Magu to the EFCC from the police ‘where he had been vegetating.’ Adoke attributes his source of information on the alleged Osinbajo instruction to Magu against him to an unnamed governor from the North West, who according to him, claimed Magu told him that he had the instruction of Osinbajo to ‘deal with Adoke.’
“Adoke equally claims that an unnamed senator also confided in him that Magu nursed a personal grouse against him because he believed that he (Adoke) owned half of the Centinary City in Abuja.That Adoke neither named the North West governor nor the Senator that provided the weighty intelligence on which he took Magu to the guillotine in his book, could only mean one thing: the claims are tissues of lies, contrived to entertain and attract underserved attention to himself. The acting Chairman of EFCC Ibrahim Magu categorically states that at no time did the Vice President discuss, counsel, or direct him in any way on any issue concerning Mr. Adoke. It is wicked and evil to make such a false allegation against anybody especially where it is based on hearsay.
“[It] is obvious that what Adoke is offering the reading public in the account of his sojourn in governance is nothing but a bouquet of half truths and plain lies.The accounts in Chapters 8 and 9 as it relates to the EFCC and its Chairman, Ibrahim Magu are not only inaccurate but self serving. For the records and emphasis, Magu never received any instructions from the Vice President, neither had he communicated verbally or in writing to any governor from the North-West or senator about such a patently false purported instruction from Osinbajo to ‘deal with Adoke.’
“The EFCC is not the battle axe of political figures and could not have been called out to deal with anyone. Adoke’s ploy is simple. He wants to create a false narrative that the  offenses for which he has been charged are not genuine but are the product of some high level conspiracy against him. But, first of all, there is no discernible reason for such a conspiracy. Secondly, it is an entirely false premise. It is clear that this is symptomatic of a drowning man clutching at straws.
“Adoke ran well outside the track when he said he was instrumental to reinstating Magu, to the EFCC from the police ‘where he had been vegetating.’ The Commission is unaware of Adoke’s role in Magu’s return to the Commission in 2012 after being away for a few years. It is well known that the EFCC Acting Chairman is a pioneer staff of the Commission, with many stripes to his sleeves by way of accomplishments that have no link to Adoke.
“Magu and the EFCC have no interest in any public spat with Adoke who remains a suspect under investigation for criminal offences and against whom a competent court had issued a subsisting warrant for his arrest. The said warrant has already been executed by the International Police Organisation which placed him on its wanted list.”
ADVERTISEMENT
The anti-graft agency said Adoke should now make himself available for prosecution.