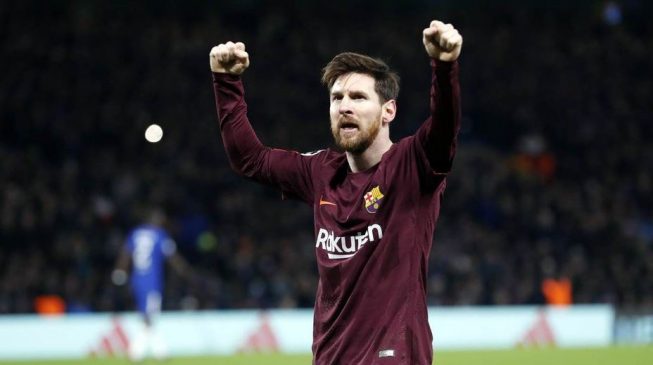 Lionel Messi, Barcelonian forward, has set a record of winning the FIFA best male footballer of the year six times.
The 32-year-old was announced the winner at a ceremony on Monday; beating his arch-rival Cristiano Ronaldo and Virgil van Dijk, who was recently named UEFA player of the year.
ADVERTISEMENT
Having missed the cut last season, Messi scored 36 league goals to clinch the 2019 gong.
He won the European Shoe for the sixth time.
With 13 assists, Messi was involved in over half of all the goals scored by Barcelona in their 2018/19 title-winning campaign.
He scored 12 goals in just 10 appearances in the Champions League which fired him to the top of the goalscoring charts in Europe’s biggest club competition.
In total, Messi scored 51 goals in 49 games; making it the sixth time he has exceeded the 50 goals-a-season barrier.
The Best FIFA Awards was launched in 2016 after France Football broke the Ballon d’Or away from world football’s governing body following corruption allegations.
The 2019 FIFA Best Award ceremony was held at the Teatro Alla Scala in Milan on Monday night.
Megan Rapinoe of the USA won the Best Women’s Player of the year award ahead of compatriots, Alex Morgan and England’s Lucy Bronze.
Liverpool’s Jürgen Klopp was named Best Men’s coach of the year beating English Premier League compatriots of Pep Guardiola and Mauricio Pochettino of Manchester City and Tottenham Hotspur respectively.
“What can I say. I have to say thank you to a lot of people obviously. Nobody would have expected this 20 years ago, five years ago, four years ago,” Klopp said.
“Mauricio I won that game, that’s why I’m here not you. That’s just how football is.
“I say thank you to my club. I have to thank my team. As a coach, you can only be as good as your team.
“I’m really proud of being a manager of an incredible bunch. I don’t understand 100% individual prizes. But I get it. I’m here for a lot of people.
“I’m really proud to announce that I’m a member of the Common Goal family.”
For the Best Women’s coach award, Jill Ellis of the USWNT beat England’s Phil Neville and Sarina Wiegman of Netherlands.
ADVERTISEMENT
Here is a full list of FIFA Best Awards
Best Men’s player
Lionel Messi (Barcelona/Argentina)
Best Women’s player
󠁧󠁢󠁥󠁮Megan Rapinoe (Reign FC/USA)
Best Men’s Coach
Jurgen Klopp (Liverpool)
Best Women’s coach
Jill Ellis (USA)
Best Women’s goalkeeper
Sari van Veenendaal (Atletico Madrid/Netherlands)
Best Men’s Best Goalkeeper
Alisson Becker (Liverpool/Brazil),
Puskas Award
Daniel Zsori (Debrecen v Ferencvaros)
Best Fan
Silvia Grecco
Best Fair Play
Marcelo Bielsa and Leeds United FC
Best FIFPro Men’s XI
Alisson Becker, Matthijs de Ligt, Sergio Ramos, Virgil Van Dijk, Marcelo, Luka Modric, Eden Hazard, Frenkie de Jong, Kylian Mbappe, Cristiano Ronaldo, Lionel Messi
Best FIFPro Women’s XI
Sari van Veenendaal, Lucy Bronze, Wendy Renard, Nilla Fisher, Kelley O’Hara, Amandine Henry, Julie Ertz, Marta, Rose Lavalle, Megan Rapinoe, Alex Morgan