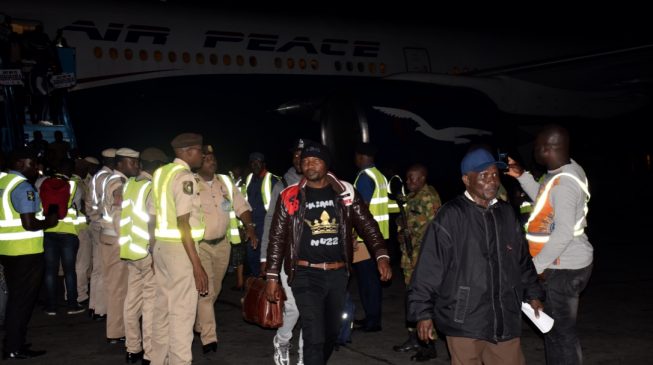 A second batch of Nigerians fleeing South Africa over xenophobic attacks will arrive on Wednesday.
They were earlier scheduled to arrive Nigeria 8pm on Tuesday but an Air Peace aircraft detailed to evacuate them was denied landing permit by the South African government.
ADVERTISEMENT
But Godwin Adama, Nigeria’s consul-general in South Africa, later said the landing permit had been granted.
“They will land tomorrow,” an official with the Nigerians in Diaspora Commission (NIDCOM) told TheCable.
Allen Onyeama, chairman of Air Peace had said the airline’s B 777 aircraft deployed for the operation was still on standby at the Murtala Mohammed International Airport, Lagos.
“Our crew waited till 3:00 am but when the permit did not come, they went back to the hotel. Once we get the permit we will set off to South Africa. We don’t want to speculate but we are hopeful they will give the permit,” he had said.
About 320 Nigerians had indicated interest to return home, after about 187 came with the first batch a week ago.
The evacuation followed President Muhammadu Buhari’s directive for Nigerians willing to leave the country to do so.
President Cyril Ramaphosa of South Africa had apologised to Nigeria over the xenophobic attacks on Nigerians in his country.
ADVERTISEMENT
The apology was tendered through Jeff Radebe, a special envoy from South Africa.