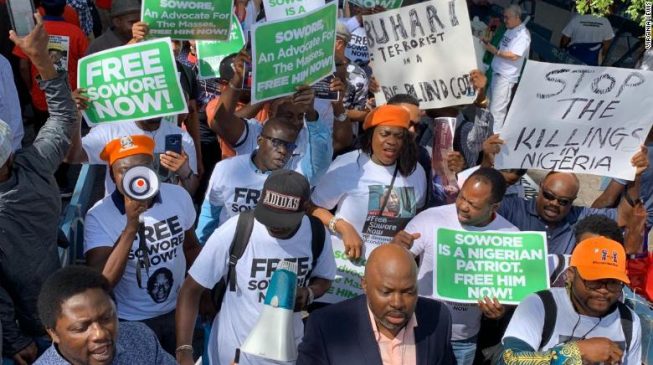 Opeyemi, wife of Omoyele Sowore, convener of RevolutionNow movement, led a protest against President Muhammadu Buhari outside the UN headquarters in New York on Tuesday, according to CNN.
Buhari is among the dignitaries attending the 74th session of the United Nations General Assembly. The Nigerian leader addressed the session earlier on Tuesday.
ADVERTISEMENT
CNN said Opeyemi used the protest as an avenue to mount pressure on the Buhari administration to release her husband who has been in detention since August 3.
Operatives of the Department of State Services had arrested Sowore in Lagos and transferred him to Abuja two days after.
In a transcript of his first conversation with the secret police, Sowore said he had been denied access to his loved ones.
His wife told CNN that she had been allowed only two phone conversations with her husband since his arrest.
“It is very sad to see the cause of action this has taken in the past one and a half months, especially for someone that was calling for a change for the better in Nigeria,” she was quoted to have said.
“It’s been almost two months since he walked out the door. Children are resilient in times like this, but they miss their father and are really hoping for his safe return.”
The DSS had initially obtained a court order to detain Sowore for 45 days. On Friday, Sowore was charged to court for “conspiracy to commit treason” and “insulting” Buhari.
But a federal high court in Abuja granted him bail on Tuesday and ordered his release to Femi Falana, his counsel.
ADVERTISEMENT
Taiwo Taiwo, the presiding judge, said there was no longer a subsisting order holding Sowore whose wife had earlier said the government had no grounds to hold her husband.