Nigeria pulls out of World Economic Forum in S’Africa, ‘to recall’ high commissioner 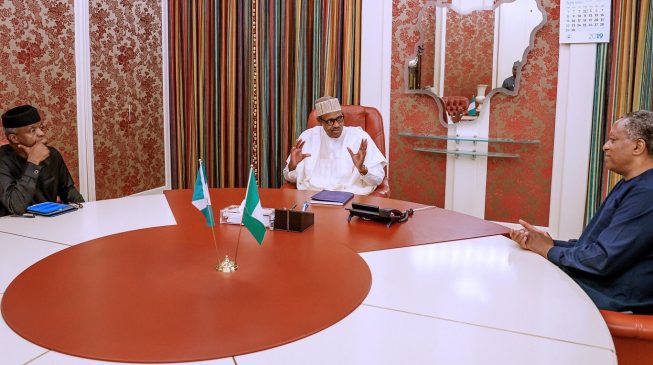 Nigeria has pulled out of the ongoing World Economic Forum in Cape Town, South Africa, over fresh xenophobic attacks.
The country is also making plans to recall Kabiru Bala, its high commissioner to South Africa, according to a presidential source.
ADVERTISEMENT
The source said thedecisions were taken at a meeting between President Muhammadu Buhari, Vice-President Yemi Osinbajo and  Geoffrey Onyeama, minister of foreign affairs, at the presidential villa in Abuja, on Tuesday.

Osinbajo was to represent Nigeria at the three-day forum ending on Friday.
In its initial response to the fresh attacks, the federal government had summoned Bobby Monroe, South Africa’s high commissioner to Nigeria.
Buhari also dispatched a special envoy to convey to President Cyril Ramaphosa, his concerns on the attacks.
Nigeria has also demanded full compensation for its citizens involved in the latest attacks.
“In the first place, we must address the issue of compensation. There has to be accountability and there has to be responsibility for compensating all those Nigerians that have suffered loss and we are going to absolutely push forward,” Onyeama had told Moroe at at a joint news briefing in Abuja on Tuesday.
TheCable had reported that Buhari was contemplating turning down the invitation of his South African counterpart over the violence against Nigerians in South Africa.
Ramaphosa had invited the Nigerian leader to his country on October 3 for discussions on strengthening the unity between both countries.
When both men met on the sidelines of the seventh Tokyo International Conference for Africa Development (TICAD7) in Yokohama, Japan, last week, they pledged commitment to the meeting which is now less likely to hold.
The latest incident in South Africa has sparked a nationwide outrage, with mobs invading MTN, Shoprite, PEP Stores and other South Africa-owned businesses across the country.
In Ibadan, Oyo state capital aggrieved individuals set MTN office on fire. The offices of the telecommunications giant were also attacked in Abuja and Akwa Ibom.
In Lagos, suspected hoodlums broke into a Shoprite outlet in Ajah, carting away items such as grocery, electronics and bicycles.
One person was killed while a police van was set on fire during an outbreak of violence at a Shoprite outlet on Lekki-Epe expressway.
ADVERTISEMENT
A store belonging to PEP was also looted in the Surulere area of Lagos state.
Security have been beefed up in branches of Standard Chartered Bank, another South African business operating in Nigeria.

This report is credited to Thecable