OBITUARY: Okonjo, the expert who lectured in Soviet Union and touched many lives in his kingdom 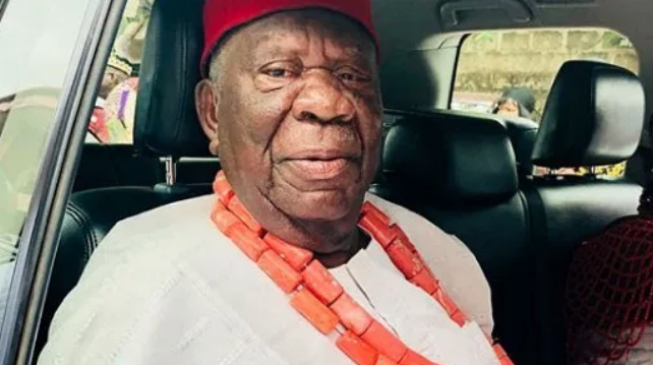 If not for politics, Ngozi Okonjo-Iweala, a former minister of finance, would have become president of the World Bank. Oh well, this is the sentiment of Chukwuka Okonjo, her father, who passed away on Friday at the age of 91.
Indeed, at some point, there were speculations his daughter, who had risen to the number two position at the institution, could become president of the bank. Okonjo would liken her achievements at the bank to his streak at the United Nations (UN) where he earned recognition.
ADVERTISEMENT
“So they were very pleased with my work. They honoured me the way they honour people. When you retire from the UN, if you’ve done very well, they give you an extra job,” he told Daily Trust in an interview in 2018.
“They honoured me that way and they are doing the same to my daughter, Dr. Ngozi Okonjo-Iweala. You know my daughter used to be the woman who ran the World Bank. If not for the politics, she should have been President of the World Bank.”
‘I DID MY WORK WELL AT THE UN’ 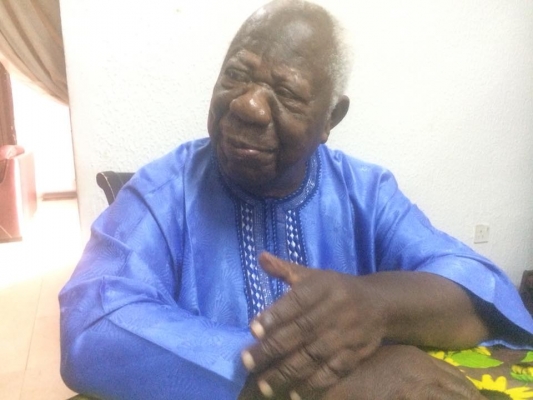 At a time the UN wanted to teach nations how populations grow and migrate, Okonjo, a mathematician, was the man for the job. After setting up the Regional Institute for Population Studies (RIPS) in Ghana, the UN handed it over to him to run.
“I did my work rather well. I produced about four times what they thought I would produce and at a higher and more qualified level,” he said in the interview.
“I became a big expert chosen to go to the Soviet Union to lecture them, tell them things; do the big things like sitting in the box next to where the head of the place normally sits.” Okonjo with a framed letter of commendation from old Ibadan Boys High School
Okonjo’s diligence came a long way through. On his 90th birthday in 2018, a delegation of old students of Ibadan Boys High School, where he served as principal, presented to him a letter of commendation written in 1953 by a colonial education administrator who praised him for the accomplishments of the school under him.
“He was only 25 at the time,” his daughter wrote in a tribute.
She said her father was a passionate intellectual and prolific writer whose last book was published at the age of 90.
SURVIVED A THIRD STROKE 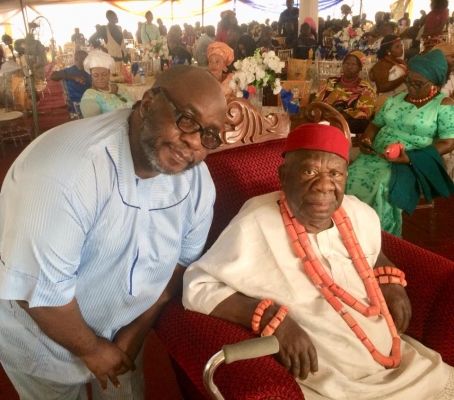 Okonjo with Taiwo Obe, his former student, at Ibadan Boys High School
Old age and ailments are usual conditions. As it is common with people of his age, the nonagenarian battled stroke. Surviving a stroke the third time surprised his doctors.
“Incidentally, this is the third stroke I’m having and by all the rules of the game, I should be dead,” Okonjo said.
“But I will be leaving for Europe very soon. When they tell them he’s had three strokes every doctor is shocked and says three strokes? He ought to be in the ground, buried and not walking around.”
WAS UNASSUMING ABOUT WHAT HE DID FOR HIS PEOPLE
Besides being an academic, Okonjo was the obi of Ogwashi-Uku in Delta state.  But he would not inaugurate projects for the camera.
About 12 towns and villages benefited from a water project he inaugurated.
“The government at a time wanted to give Ogwashi-Uku water and they assigned N441m. I looked at what they did and smiled,” he said in the interview.
“Therefore, I set up a project so that 12 towns and villages can have water. The project is there. I can show you. But I don’t shout it all over the place. The dam is there. But don’t forget, people forget little villages because they don’t have anyone to speak for them.”
VOTED EVEN AT AGE 90 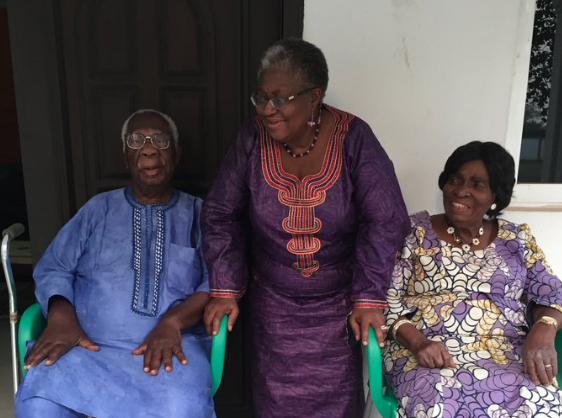 Okonjo-Iweala with her parents during the presidential election in February
Perhaps, only those with strong convictions will at 90 years go through the process of registering to vote in Nigeria.
Okonjo’s daughter shared a picture of her parents after exercising their rights in the last election. In a tweet, she would emphasised that they voted “at ages 90 and 88 respectively”.
”He had come out to vote because he believed in the Nigerian project,” his daughter conveyed his thoughts in a series of tweets.
“I want a united Nigeria where every citizen would have a sense of belonging. As a nation, we want a leader that will have the interest of our nation at heart. My concern is for a better Nigeria.”
Okonjo had a bachelor’s degree in mathematics; two master’s degrees in mathematics and economics, and a doctorate degree in mathematical statistics.
ADVERTISEMENT
He started as a mathematics and science teacher at the Government College, Umuahia. He also taught at the Western Boys High School, Benin, and was principal, Ibadan Boys High School. He taught at the University of Ibadan, the University of Nigeria Nsukka, and the University of Ghana.
He also served as an adviser to governments and international agencies, and was pro-chancellor of the University of Ilorin, until he passed away.
Photo credit: Ngozi Okonjo-Iweala and Old Ibadan Boys High School