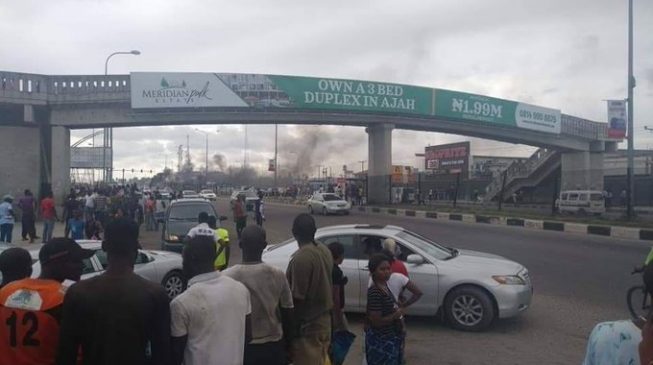 A yet to be identified person has been shot dead outside the Shoprite premises around Jakande, Lekki area of Lagos state.
TheCable reports that a witness whom described the victim as a protester said he was killed after an angry mob set a police van on fire during a protest on Tuesday.
ADVERTISEMENT
Aggrieved persons had stormed the complex located on the Lekki-Epe expressway, chanting violent songs.
Policemen on ground had prevented them from gaining access into the mall but the protesters lit bonfires.
They also set up barricades around the complex, compounding the traffic situation along the ever-busy expressway.
Bala El-Kana, spokesman of the Lagos state police command, told TheCable that he could not give details of the attack.
“I don’t have any casualty figure, but I know there was a violent attack,” he said.
The development comes a day after reports of attacks on foreign nationals, including Nigerians, in South Africa, went viral.
There has been a nationwide outrage over the fresh attacks on Nigerians based in South Africa. Geoffrey Onyeama, minister of foreign affairs, had accused the South African police of complicity.
The federal government had earlier summoned Bobby Moroe, South Africa’s high commissioner to Nigeria, over the attacks on Nigerians in that country.
ADVERTISEMENT
Moroe had denied that there was no fresh case of xenophobia in his country, describing the attacks as “sporadic cases of violence”.