Onumah: DSS asked why I wasn’t carrying a Biafran passport 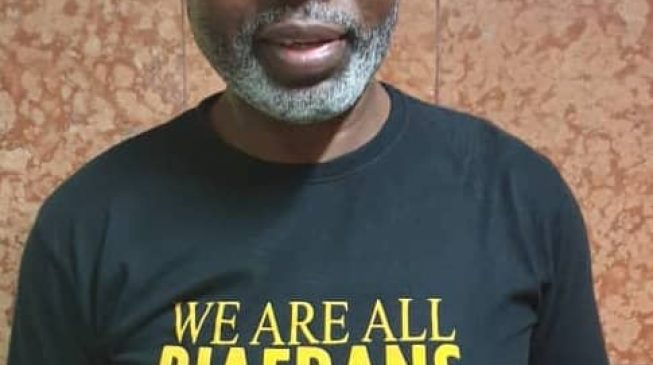 Chido Onumah, coordinator of African Centre for Media & Information Literacy (AFRICMIL), says the Department of State Services (DSS) queried him on why he was carrying a Nigerian passport despite being a “Biafran.”
Onumah said this while narrating his encounter with the DSS operatives on Sunday.
ADVERTISEMENT
TheCable had reported how the operatives detained the journalist at Nnamdi Azikiwe International Abuja, Abuja, upon his arrival from Europe.
He spent at least four hours in their custody before he was freed around 10pm.
In a statement shared with TheCable on Monday, Onumah said the operatives accosted him for wearing a “Biafra” T-shirt.
He said: “A DSS officer said they had intel (likely from people who were with me on the Lufthansa flight from Frankfurt to Abuja) that I had come into the country to join some people planning to cause disaffection.
“That since I am a Biafran, why should I carry a Nigerian passport. I told them I am a Nigerian and that’s why I have a Nigerian passport; that there is no country called Biafra, therefore, I couldn’t possibly hold a Biafran passport.
“He replied: ‘But that is not what is written on your T-shirt.’ When I replied that the inscription is the title of a book, (and that the book was available on Amazon and bookshops in the country) another officer said “there is a difference between the book and the T-shirt’.”
He added that the DSS operatives requested for his T-shirt and “a “commitment” that I won’t do anything that would cause ethic, religious or political tension in the country.”
ADVERTISEMENT
Peter Afunanya, DSS spokesman, had earlier confirmed Onumah’s shirt got the service’ attention.