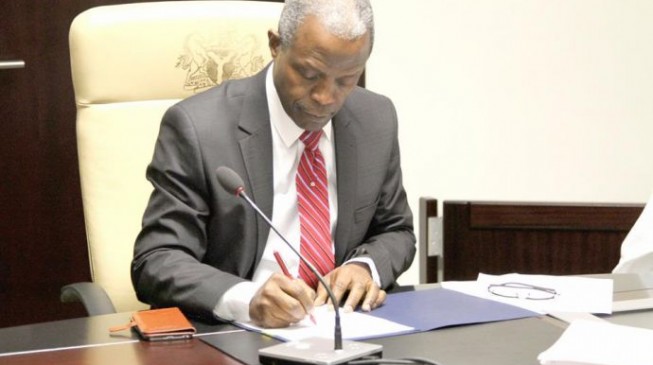 Femi Atoyebi & Co, solicitors acting on behalf of Vice-President Yemi Osinbajo, has written a petition to Google Nigeria demanding the suspension of a video published by Roots TV on YouTube.
According to the letter seen by Nigeria's most credible independent online newspaper, Roots TV was said to have published a material which contained defamatory claims about Osinbajo.
ADVERTISEMENT
“It is our understanding that you have provided a platform through which an account holder named RootsTV Nigeria, an online news platform that is available through this link… is able to continuously broadcast defamatory contents,” the letter read.
“In the broadcast published on the accounts of RootsTV Nigeria on September 20, 2019, the following incorrect statements and untruths were made:
“a. Our Client was stacking up public funds from agencies directly under his supervision, with a strong insinuation that the Federal Inland Revenue Service (FIRS) was the principal organ by which the alleged fraud was perpetrated.
“b. Our Client was unable to explain the alleged imbalance and discrepancies on the account of the FIRS on the interrogation of the Chief of Staff to the President, Mr Abba Kyari.
“c. Our Client was unable to explain the alleged failed disbursement to all beneficiaries under the Social Investment Programme of the Federal Government in Adamawa State.
“Our Client, therefore, demands that you immediately remove and/or suspend the publication/broadcast of the defamatory publication on the account of RootsTV Nigeria on the platform of YouTube.”
ADVERTISEMENT
The letter, which was signed by Osaro Eghobamien and Femi Atoyebi, said the vice-president will explore legal options if the broadcast is not removed.