P&ID is a scam attempting to cheat Nigeria of billions of dollars, Buhari tells UN 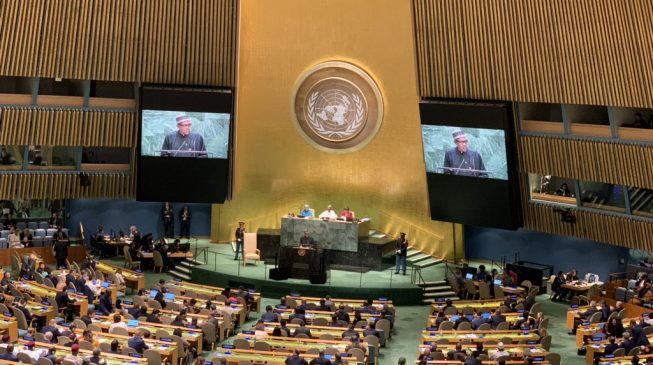 The president also called out major tech companies, who he said were facilitating the spread of racist, xenophobic and false messages.
“The world was shocked and startled by the massacre in New Zealand by a lone gunman taking the lives of 50 worshippers.
“This and similar crimes which have been fuelled by social media networks risk seeping into the fabric of an emerging digital culture. Major tech companies must be alive to their responsibilities.
“They cannot be allowed to continue to facilitate the spread of religious, racist, xenophobic and false messages capable of inciting whole communities against each other, leading to loss of many lives. This could tear some countries apart.”

President Buhari called on industrial countries to take a long term view of Africa to ensure coordinated development of the continent.
“Current attempts to help develop Africa by industrial countries are un-coordinated and plainly incremental,” Buhari added.
“We have the skills, the manpower and the natural resources, but in many instances, we lack the capital – hence my plea for industrial countries to take a long-term view of Africa. We request you to come and partner with us to develop the continent for the benefit of all.
“Africa charges you with the singular task of initiating the effort we are calling for. The United Nations has in place processes for promoting collective action to combat global threats. No threat is more potent than poverty and exclusion.
“They are the foul source from which common criminality, insurgency, cross border crimes, human trafficking and its terrible consequences draw their inspiration.”

The president also spoke about the National Social Investment Programme, which he said can eventually eliminate poverty.
“Poverty in all its manifestations, remains one of the greatest challenges facing our world. Its eradication is an indispensable requirement for achieving sustainable development.”
“In this regard, Nigeria has developed a National Social Investment Programme – a pro-poor scheme that targets the poorest and most vulnerable households in the country.
ADVERTISEMENT
“Under this initiative easy, access to financial services are facilitated to our traders, artisans, market women and co-operative societies. This type of initiative can help lessen and eventually eliminate mass poverty in Africa.
“At the core of our efforts to build an inclusive society, our programmes are focused on youth and women empowerment. These programmes aim at ensuring women and youth participation in governance, industry, climate action and agriculture.”