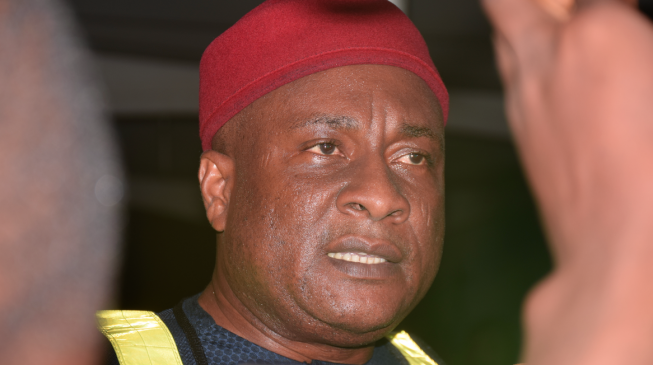 The house of representatives has resolved to honour Allen Onyeama, chief executive officer (CEO) of Air Peace Airlines, for airlifting Nigerians stranded in South Africa at no cost.
Femi Gbajabiamila, speaker of the house, said the lower legislative chamber has invited Onyeama to appear before it on Wednesday.
ADVERTISEMENT
Many Nigerians were targeted in the recent xenophobic attacks in South Africa.
Air Peace offered to evacuate those willing to return at no cost. At least 187 have been brought home while more are scheduled to return this week.
Speaking at the plenary session on Tuesday, Gbajabiamila said Nigeria owes Onyeama for his act of patriotism.
“He acted without consideration of cost, of tribe or personal interest. He acted in the best traditions of patriotism and love of country,” he said.
“He has been invited; I thought that the people’s house should commend him. So he will be hear tomorrow for us to commend him on behalf of Nigerians.”
Gbajabiamila chided Geoffrey Onyeama, minister of foreign affairs, for failing to honour an invitation to brief them on the incidents in South Africa.
“The minister has been asked on several occasions since this incident broke, both by the foreign affairs committee and by the leadership of the house, for a full briefing on what transpired to enable us address the issue properly,” he said.
“But it is unfortunate that the minister has not responded to the invitation, and even when the committee chairman wrote on behalf of the leadership of the house, he still did not respond.
“I believe we are one government and are here to serve the internet of Nigerians. So, I want to use this platform to send a direct message to the minister that he needs to respect the invitation of the committee of the house.”
ADVERTISEMENT
He added that he will discuss the issue with President Muhammadu Buhari, saying: “I think respect is reciprocal.”