REVEALED! Audio of Khashoggi’s gruesome killing: ‘I listen to music when I cut’ 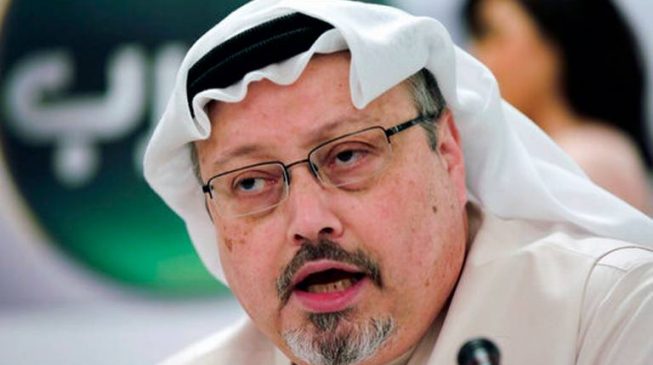 Audio recordings between Jamal Khashoggi and the hit squad that killed him have been revealed.
Kashoggi, a Saudi dissident and journalist with Washington Post who was in exile in the US, was killed, with his body allegedly dismembered on October 2, 2018 at the Saudi consulate in Turkey where he had gone to get documents for his marriage.
ADVERTISEMENT
In one of the recordings obtained by Turkey’s National Intelligence Organisation (MIT) and made available by Turkish daily Sahbah, Salah Muhammed Al-Tubaigy, the head of forensic evidence at the Saudi general security department and one of the 15 man hit squad was heard saying he listens to music when he cut cadavers.
Maher Abdulaziz Mutreb, the number two man of the hit squad had asked Al-Tubaigy if it was possible to put Khashoggi’s body in a bag.
Responding, Al-Tubaigy said, “No. Too heavy, very tall too. Actually, I’ve always worked on cadavers. I know how to cut very well. I have never worked on a warm body though, but I’ll also manage that easily. I normally put on my earphones and listen to music when I cut cadavers. In the meantime, I sip on my coffee and smoke. After I dismember it, you will wrap the parts into plastic bags, put them in suitcases and take them out (of the building).”
The newspaper reported that Khashoggi, according to the recording, was greeted by a familiar face or someone he knows, gauging from his reaction when he arrived at the consulate.
He was then told that Mohammad al-Otaibi, the consul-general was present in the building. He was first politely invited into the consul’s office on the second floor, and when he started getting suspicious, he said, “let me go, what do you think you’re doing?”
Responding, Mutreb said, “please sit. We have to take you back [to Riyadh]. There is an order from Interpol. Interpol demanded you be returned. We are here to take you.”
This, Khashoggi also responded, asking if there were any lawsuits against him.
“My fiancée is waiting outside for me,” he said.
During the interrogation, the paper reported that another unidentified hit squad member, repeatedly, told Khashoggi to “cut it short.”
The journalist was asked to leave a message for his son that he was in Instabul, but he refused, asking how such a thing could take place at a consulate.
“I’m not writing anything,” he insisted.
He was later drugged, and the newspaper reported that his killers had already put on a plastic bag on his head, and he would eventually be suffocated to death.
Scuffling and struggling, reportedly, dominate the recordings, with occasional questions and directives from the hit squad heard in between.
Then the postmortem phase begins, which include sounds of dismembering Khashoggi’s body.
Mutreb and Al-Tubaigy are among the five suspects now facing death penalty in Saudi Arabia over the murder.
Khashoggi’s death had sparked international outrage with many pointing accusing finger at Mohammed bin Salam, Saudi’s crown prince.
ADVERTISEMENT
Saudi authorities had earlier denied knowledge of his death, saying he might have been killed in a fistfight, but the authorities later announced that after an investigation, they found that the order to kill the journalist had come from one of the leaders of the Saudi team in Istanbul.