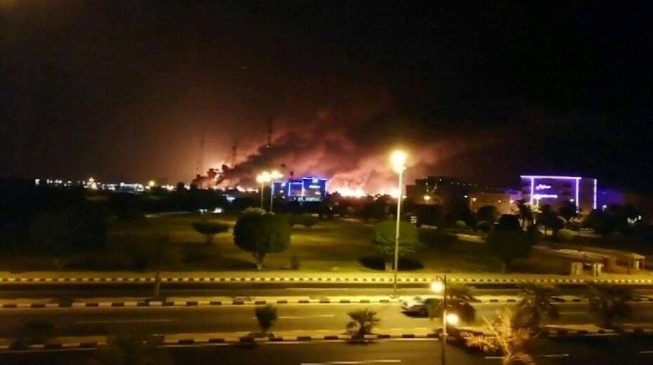 Two drone strikes on Saudi Arabian oil facilities by Yemen rebels have reduced the country’s production by half and threatened to push up crude prices.
Some experts have warned that with the projected production shortage of 155 million barrels per month as a result of the strikes, oil prices could go as high as $100 — last seen six years ago.
ADVERTISEMENT
Brent crude, the global benchmark and equivalent of Nigeria’s Bonny Light, closed at $52 on Friday.
A much higher oil price would be good news for Nigeria which is currently struggling to meet its revenue targets, but industry watchers have also told TheCable that the fuel subsidy regime could nuetralise potential benefits.
Nigeria reportedly spent $5 billion to subsidise imported petroleum products in 2018 as all its refineries are either down or performing poorly.
The benefits of higher oil prices hardly count as the government has to spend much of the extra revenue to keep the offical pump prices.
The 2019 budget was benchmarked at $60 but prices have fallen below the projection, and the government has been trying to make up for falling revenues by increasing taxes and borrowing both from foreign and local sources.
Saturday’s drone strikes, claimed by Yemen’s Houthi rebels, cut 5 per cent of the daily global oil supply.
Houthi rebels said 10 drones targeted state-owned Saudi Aramco oil facilities in Abqaiq and Khurais.
OPEC figures for August 2019 put the total Saudi production at 9.8 million barrels per day.
CNN Business quoted a source as saying Aramco, the national oil company, “hopes to have that capacity restored within days” — but the rebels have threatened to continue with the strikes in protest at Saudi support for the Yemeni government.
The Saudi interior ministry confirmed the drone attacks caused fires at the two facilities. In a statement posted on Twitter, the ministry said the fires were under control and that authorities were investigating.
ADVERTISEMENT
“Abqaiq is perhaps the most critical facility in the world for oil supply. Oil prices will jump on this attack,” Jason Bordoff, founding director of the Center on Global Energy Policy at Columbia University, said in a statement.