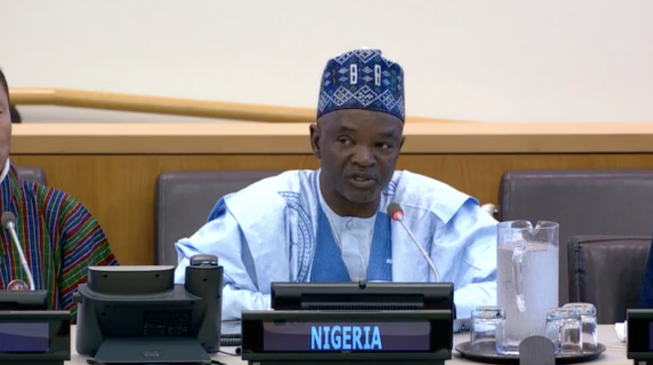 Mohammed Mahmood, the minister of environment, says seven Nigerian universities run strictly on renewable energy.
The minister, who spoke at the Climate Action Summit 2019 in New York on Sunday, said Nigeria is the first country in Africa to issue a sovereign green bond.
ADVERTISEMENT
Mahmood, who said Nigeria is committed to reducing its emissions by as much as 45 percent by 2030, added that seven federal universities are being powered strictly by renewable energy.
He added that 30 more federal universities are coming on board.
“In Nigeria’s continuing committment to the climate change issues, I am happy to report that we are still committed to reducing our emissions by 20 percent unconditionally, and 45 percent conditionally by 2030,” Mahmood said.
“We have employed the following strategy to be able to meet our committment; In climate financing, Nigeria is the first country in Africa to issue sovereign green bond.
“In which we are able to raise over N10 billion, the proceed of which we use in the area of energy and environment. Currently, we have seven federal universities that are being powered strictly by renewable energy, and we have another 30 coming on board.”
The minister did not state the names of the federal universities.

He went on to say that Nigeria has raised N15 billion from its green bond issue in 2019.
“Our forest cover that used to be four percent has improved to over six percent at this time,” he added.
“The green bond was so successful that we have issued another sovereign green bond in this year 2019, and raised about N15 billion, of which we intend to spread to other sectors of the environment, and that includes transportation, agriculture, water supply, and energy.”
He said the countries in the Lake Chad region need over $50 billion to recharge and resuscitate the Lake Chad Basin.
ADVERTISEMENT
Mahmood lauded the involvement of the youth in climate action, staying that when he was 18, he did not worry about climate issues, but the youths now do so.