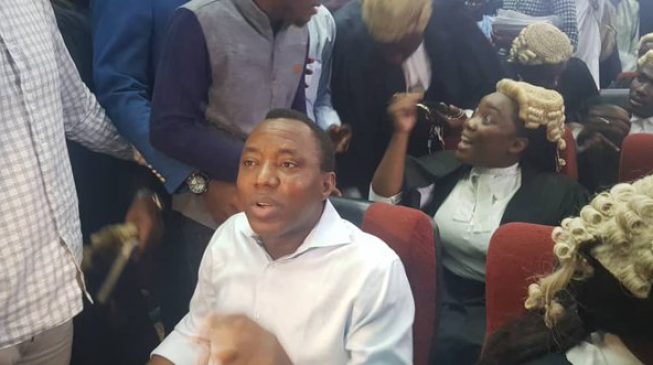 Omoyele Sowore, convener of #RevolutionNow Movement, says while arrested Boko Haram commanders in custody of the Department of State Services (DSS) are allowed to make calls, he has been denied access to telephone.
According to SaharaReporters, Sowore said this on Monday at the federal high court in Abuja where he is currently being arraignedfor “conspiracy to commit treason and insulting President Muhammadu Buhari”.
ADVERTISEMENT
The activist said he was yet to know what charge was brought against him as he had not spoken with his lawyers.
“I am not allowed to see sunshine. I’ve not been outside except today. I am happy people are staying strong,” he said.
“I have no doubt this will come to an end in favour of the Nigerian people. Whether you like it or not, the revolution will happen. It is only a matter of time. They gave me no access to telephone. No TV. No newspapers.
“What is interesting is that Boko Haram commanders who are engaged in high level terrorism have access to telephone, TV and even cable in their cells. So you wonder which one is better: a freedom fighter or a terrorist.”
He also said he has a bad shoulder following the way he was rough handled when arrested.
Sowore, who was presidential candidate of the African Action Congress (AAC) in the 2019 elections, was arrested in Lagos on August 3 ahead of a planned nationwide #RevolutionNow protest.
The protest, the government said, was aimed at removing the president during his term of office otherwise than by constitutional means.
The court had earlier granted the DSS request to keep Sowore for 45 days but he was later granted bail.
ADVERTISEMENT
The agency refused to release him despite fulfilling his bail condition.