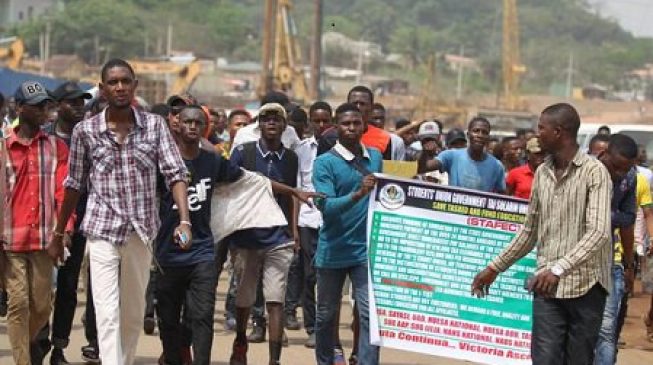 Two students of the Federal University Oye Ekiti (FUOYE) and a policeman have been reportedly killed in a clash between the police and students.
The students who were protesting insufficient supply of electricity had marched to the Benin Electricity Distribution Company (BEDC) substation in Oye Ekiti, barricading the express road.
ADVERTISEMENT
The protesters reportedly vented their anger on Bisi Fayemi, first lady of the state, whose convoy was prevented from passing.
Policemen in her convoy were said to have opened fire which annoyed students who in turn shattered the windscreen of vehicles in her convoy.
“They started the protest from the school gate around 9am, and then moved to the PHCH substation,” a source told TheCable.
“They were trying to force their way into the facility when a dispatch of policemen came. The students appeared to have outnumbered the policemen and before we knew it, gunshots were exchanged between the policemen and some of the students who are suspected to be cultists.
“One of the policemen and two students were killed and others sustained injuries.”
The source said the protesting students were yet to leave the scene as at 8pm on Tuesday.
Reacting, Caleb Ikechukwu spokesman of the police in the state said it is not true that police shot at the protesting students.
He said the police removed the blockade and dispersed the students peacefully.
“The protesting student took to the Federal High way away from the perimeter wall of University and Blocked the Oye-Ikole-Lokoja Federal Roads, their by causing the breach of Peace and grid lock to motorist plying that route,” the statement read.
“The protesting students also invaded the office of Benin Electricity Distribution Company (BEDC) in Oye Ekiti.
“It took the quick intervention of policemen deployed to the scene to prevent further damage of the office complex.
“The Police Officers at the scene pacified with the protesting student, removed the blockade and dispersed the protesting student peacefully.
“However, the protesting student turned around in their numbers and took their plight to Her Excellence, Erulu Bisi Fayemi, The Wife of the Executive Governor of Ekiti State who was at an empowerment program.
“The protesting Student suddenly became unruly, hostile and took laws into their hands, also vandalized the motorcade of her excellency.”
ADVERTISEMENT
The police said the protesting students did not stop at that, they also assaulted the policemen who were at the scene to maintain law and order and damaged their vehicle.