Tribunal fixes Wednesday for judgement on Atiku’s petition against Buhari 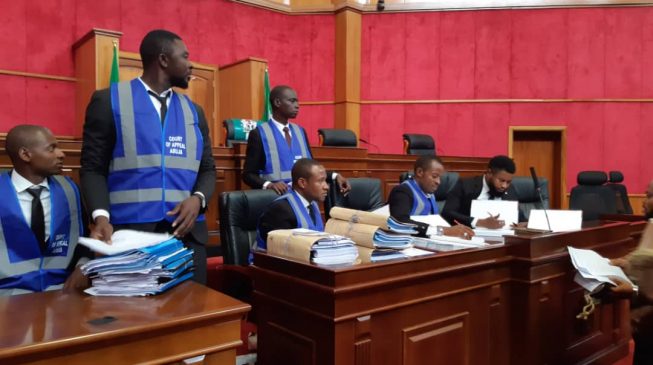 The presidential election petition tribunal will deliver judgement on Atiku Abubakar’s petition, challenging the victory of President Muhammadu Buhari, on Wednesday.
Sa’adatu Musa, spokesperson of the court of appeal, disclosed this in a notice on Tuesday.
ADVERTISEMENT
“Please be informed notice has been given for judgment to be delivered tomorrow September 11, 2019. 9. 00 AM,” Musa said.
In his petition, Atiku, the PDP presidential candidate in the February election, had claimed he defeated Buhari by 1,615,302 votes.
Atiku based his claim on information he said was accessed from the server of the Independent National Electoral Commission (INEC).
According to him, he polled 18,356,732 votes to defeat Buhari, whom he claimed polled 16,741,430 votes.
He argued that the president was unqualified to vie for the highest office in the land because he did not possess the minimum qualification as required by the constitution.
“The 2nd respondent (Buhari) was not duly elected by the majority of lawful votes cast at the election. The election of the 2nd respondent is invalid by reason of corrupt practices. The election of the 2nd Respondent is invalid by reason of non-compliance with the provisions of the Electoral Act, 2010 (as amended). The 2nd respondent was at the time of the election not qualified to contest the said election,” his petition read.
“The 2nd respondent submitted to the 1st Respondent an affidavit containing false information of a fundamental nature in aid of his qualification for the said election.”
In response to the petition, the All Progressives Congress (APC) said Abubakar is not qualified to be president because he is from Cameroon and not a citizen of Nigeria by birth.
ADVERTISEMENT
The party asked the tribunal to declare the 11.1 million votes polled by Atiku and the PDP as wasted votes.
The tribunal will settle the scores on Wednesday.