VIDEO: Ezekwesili gets special session to speak on xenophobia at World Economic Forum 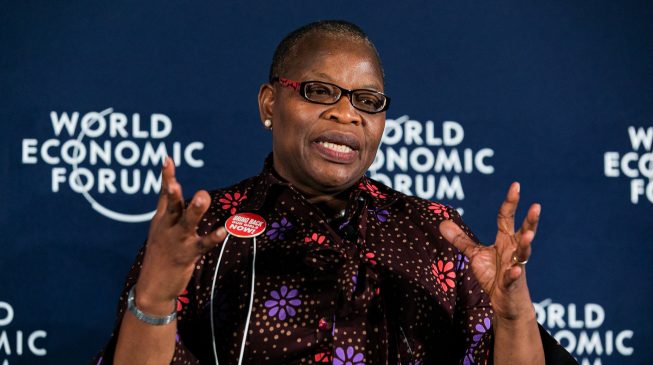 Oby Ezekwesili, former minister of education, says the Africa Continental Free Trade Agreement (AfCFTA) would not deliver on its promise if xenophobic attacks remain on the continent.
Earlier in the week, the Nigerian government at the eleventh hour decided to pull out of the World Economic Forum (WEF) in Cape Town, South Africa, following xenophobic attacks on Nigerians in Pretoria.
ADVERTISEMENT
Vice-President Yemi Osinbajo was billed to speak at the summit, but pulled out on the day the summit started.
Bashir Ahmed, media aide to the president, said Ezekwesili was at the summit on her own.
“We all thought you’d sympathize with them and boycott the WEF to properly protest the attacks,” Ahmad said via Twitter.
In her response, Ezekwesili said: “Let your Boss know that I am actually leading an effort here in South Africa that will help safeguard our citizens not the childish silly politics his government, aides and praise-singers constantly play with the lives of our Citizens.”
She was on a panel to speak on the promise of Africa with Jim Ovia, billionaire businessman, who later on said he was pulling out of the summit.
“I think that there has to be a very distinct session for us to discuss the issues of our collaborations as Africans. The reality of what we saw in South Africa is too sordid for it to be a mere conversation by the way,” Ezekwesili said at her originally scheduled session.
“We cannot have AfCFTA where there is black on black violence in this country.”

THIS IS AFROPHOBIA NOT XENOPHOBIA

She was eventually granted a special session, where she spoke extensively on tackling xenophobia on the continent.
At the session, she said: “I believe wholly that there are some important steps that the government of South Africa should be able to take immediately.
“In order to send a signal to the people that have been victims of what I call Afrophobia, it’s not xenophobia. I haven’t seen any Italian or European, I have not seen any Chinese or India being harmed, being maimed, being killed, losing property.
“I have seen a targeting of especially my country Nigeria. I have seen a lot of single-story where people are saying things like Nigerians engage in criminal activities in South Africa.
ADVERTISEMENT
“I also know that is a single story. 18 percent of the people that teach in higher institutions in this country are Nigerians”.