Wike: I congratulated Buhari openly… many PDP governors sneak to him at night 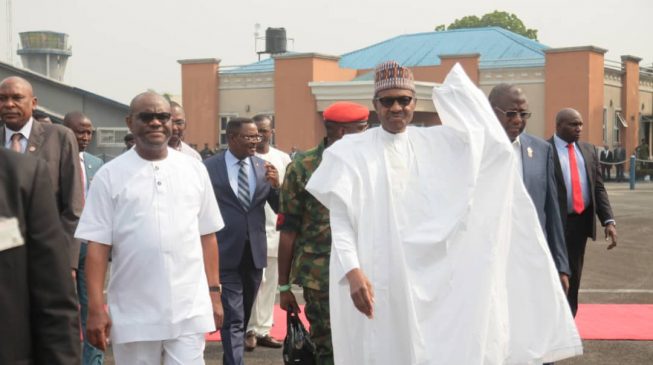 Nyesom Wike,  governor of Rivers state, says unlike most of his counterparts who sneak to Aso Rock to see President Muhammadu Buhari, he decided to congratulate the president openly.
Shortly after the tribunal dismissed the petition of Atiku Abubakar, presidential candidate of the Peoples Democratic Party (PDP), Wike congratulated the president.
ADVERTISEMENT
His party had earlier rejected the verdict of the tribunal and announced its intention to file an appeal at the supreme court.
The action of Wike, who was the coordinator of Atiku’s campaign in the south-south, had taken many by surprise.
But speaking at St. Luke’s Anglican Church, Emohua, during the funeral service of the mother of a PDP leader in the state, Wike said he knew that many people did not expect him to reach out to the president.
“I am sure all of you are surprised that I congratulated Buhari. Is it not good for me to congratulate him than to go to his house in the night?” he asked.
“Many PDP governors go to see him in his house in the night. I have never gone and I will not go. I won’t go. We are the only state that the federal government refused to pay us our money used to execute federal projects because I don’t go to see him in the night and I won’t go.
“He is not my friend; he is not doing well, but he won in court. Should I say that the court did wrong? No. President Buhari, congratulations and carry Nigerians along. Unify the country; the country is too divided. I am saying what is right. What I will do, I will do; what I will not do, I will not do.”
Wike said politics is a game of interest, adding that people of the state in the All Progressives Congress (APC) are under obligation to attract “federal benefits” to the state.
“Politics is a game of interest. And my only interest is Rivers State . Anything that is against the interest of Rivers State, I will not agree,” he said.
“These people sold us out, thinking that they are doing Governor Wike. It is the State that you are offending, because I am just one person.”
Wike said there people from Rivers who are close to Buhari yet the East-West Road, the seaports and other federal projects “have been completely neglected” since 2015.
He said nothing indicates that Rivers has prominent APC members working with Buhari, adding that as a major oil producing state, Rivers deserves major projects from the federal government.
“We produce oil . They should not punish Rivers State because of me. I am just one individual. We have not benefited anything from the Federal Government. The only thing we have benefited is the abuse they heap on me,” he said.
“They turned the NDDC into a cash cow to sponsor elections against us. Nobody protested that anomaly. Now they want us to protest because someone did not nominate the management of NDDC this time.
“Since 2015, NDDC has not had its governing board, but nobody protested. I will not be dragged into such protests “, he said.
The governor said he has no regrets declaring Rivers a Christian state, maintaining that the point would not be changed by “negative propaganda and falsehood”.
ADVERTISEMENT
He also denied demolishing any mosque in the state, attributing reports on it to “some mischief makers”.