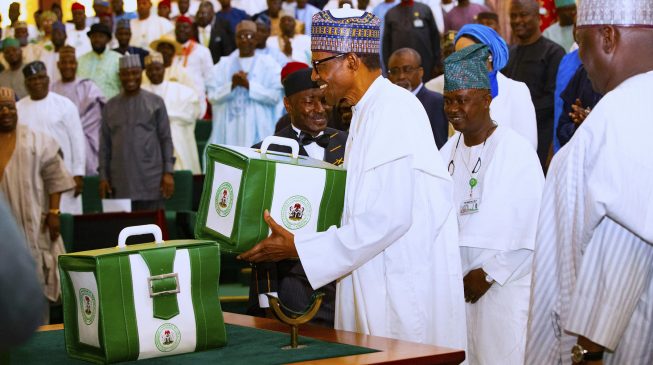 The Peoples Democratic Party (PDP) has urged the national assembly to redirect the 2020 budget to areas that would better serve the interest of majority of Nigerians.
Kola Ologbondiyan, national publicity secretary of the party,  gave the advice in a statement on Tuesday.
ADVERTISEMENT
President Muhammadu Buhari had presented a N10.33 trillion budget to the joint session of the national assembly.
But Ologbondiyan said the budget mortgage the future of the nation.
“The core of the budget remains hazy, showing streaks of padding, duplication, replete with false performance indices, deceptive projections and inexplicable expenditure assertions,” he said.
“The budget is skewed to serve the interest of the opulent, as projects that have direct bearing on the well-being of the masses were not substantially accommodated in the overall expenditure profile.”
Ologbondiyan also criticised what he referred to as allocations for “vague projects”, particularly the ministries of works and housing as well as transportation, where according to him there were of diversion of public funds in the last budget.
While works and housing got N262 billion, 123 billion was allocated to the ministry of transportation.
ADVERTISEMENT
He added that his party was “standing with millions of Nigerian youths and women to reject the paltry budgets of N48 billion for education and N46 billion for health and urges the national assembly to review the allocations in the interest of Nigerians.”