House Democrats rallied behind a measure setting out rules for the public phase of their impeachment inquiry into President Trump, endorsing the process. 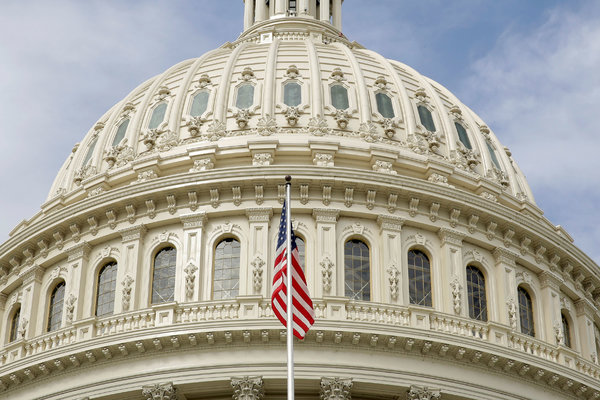 WASHINGTON — A bitterly divided House of Representatives voted on Thursday to endorse the Democratic-led impeachment inquiry into President Trump, in a historic action that set up a critical new public phase of the process and underscored the toxic political polarization that serves as its backdrop.
The vote was 232-196 to approve a resolution that sets out rules for an impeachment process for which there are few precedents, and which promises to consume the country a little more than a year before the 2020 elections. It was only the third time in modern history that the House had taken a vote on an impeachment inquiry into a sitting president.
ADVERTISEMENT
Practically speaking, the resolution outlines the rights and procedures that will guide the process from here on out, including the public presentation of evidence and how Mr. Trump and his legal team will be able to eventually mount a defense.

But its significance was more profound: After five weeks of private fact-finding, an almost completely unified Democratic caucus signaled that, despite Republican opposition, they now have enough confidence in the severity of the underlying facts about Mr. Trump’s dealings with Ukraine to start making their case for impeachment in public.

The vote removed almost any doubt that Democrats would bring a full-fledged impeachment case against Mr. Trump for his apparent efforts to pressure a foreign power into investigating his domestic political rivals. Less clear is how quickly Democrats can move to formalize their charges and, whether through public hearings and the presentation of new evidence, they can win over any Republicans.

To that end, the resolution appeared to be designed to challenge Republican criticisms that Democrats had spent the last few weeks shredding important precedents in their zeal to remove a president from office under the cover of secretive depositions. Democrats urged Republicans to view Thursday’s vote as a turning point in the process, the moment when every House member must begin engaging with the evidence itself.

The dramatic vote, with Speaker Nancy Pelosi presiding from the wooden rostrum in an unusually packed House chamber, came after an impassioned 45-minute debate that was fraught with the weight of the moment.

Ms. Pelosi read from the Constitution. Representative Kevin McCarthy, Republican of California and the minority leader, quoted Alexander Hamilton. Lawmakers listened from their seats, stone-faced and somber, while members of the public watched from the crowded gallery above.

“This is not any cause for any glee or comfort,” Ms. Pelosi said, as she stood beside a large placard of an American flag. “What is at stake in all of this is nothing less than our democracy.”

Representative Jim McGovern, Democrat of Massachusetts and the chairman of the Rules Committee, said lawmakers were “not here in some partisan exercise.

“There is serious evidence that President Trump may have violated the Constitution,” he said.
Republicans worked feverishly to hold their ranks together in opposition, with Mr. Trump rallying support at the White House ahead of the roll call. Though many of the rules are nearly identical to those Republicans adopted in 1998 when they impeached President Bill Clinton, party leaders insisted that supporting the resolution amounted to legitimizing what they view as an indefensible three-year campaign to undo the results of the 2016 election.
“Democrats are trying to impeach the president because they are scared they cannot defeat him at the ballot box,” Mr. McCarthy said. “Why do you not trust the people?”
Representative Devin Nunes of California, the top Republican on the Intelligence Committee, said the panel had turned into “a cult,” adding angrily: “We now have a full-fledged impeachment committee in the basement of the Capitol. Think about that, America.”

Once the voting began, the House chamber buzzed with activity. Ms. Pelosi could be seen on the floor counting the votes as they came in and tracking Democrats until the very last minute, leaving nothing to chance.
In a statement just after the resolution was adopted, Stephanie Grisham, the White House press secretary, said that the House had approved a process that was “unfair, unconstitutional and fundamentally un-American.”
“The president has done nothing wrong,” she said, “and the Democrats know it.”
Though it is not a perfect comparison to votes taken to authorize impeachment inquiries into Mr. Clinton and President Richard M. Nixon, Thursday’s outcome underscored the depth of partisan polarization now gripping American politics. Democrats delivered a show of unity that just weeks ago seemed improbable, with even many moderate lawmakers who are facing difficult re-election races in conservative-leaning districts voting in favor of moving forward.
Whereas the vote against Mr. Nixon registered only four objections and 31 members of the president’s party endorsed the inquiry into Mr. Clinton, this time, not a single Republican defected.
Two Democrats, Representatives Collin C. Peterson of Minnesota and Jeff Van Drew of New Jersey, voted against the measure, while Representative Justin Amash of Michigan, the House’s lone independent, supported it.

The inquiry remains a high-stakes gamble for Democrats just over a year from the 2020 balloting, as their presidential contenders — some of whom would act as jurors in a Senate trial should the House vote to impeach — are already deep into their campaigns to try to defeat Mr. Trump. Public polls in recent weeks have suggested a narrow majority of the nation backs the inquiry and believes Mr. Trump’s actions warrant scrutiny. But support for Mr. Trump being impeached and removed appears weaker, and there has been no sign that the president’s narrow but durable base of supporters has been troubled by the accusations.

Though Mr. Trump and White House aides are increasingly resigned to the fact that the House will ultimately impeach him, for now, few lawmakers in either party believe there is a real threat that he would be convicted by the two-thirds majority needed in the Senate.

The president and his allies have mounted a forceful, if at times chaotic, defense. But they are likely to have to shift course in the coming weeks as the inquiry moves into open view. After intensely criticizing the investigative process as secretive and unfairly denying Mr. Trump a say in the proceedings, they will be forced to engage more directly in the substance of Democrats’ mounting allegations.

Even without the benefit of a Justice Department investigation to build on, the House inquiry has moved with remarkable speed since Ms. Pelosi told the country last month that she would launch a formal impeachment inquiry into whether Mr. Trump had betrayed his oath of office by seeking to enlist a foreign power to tarnish a rival for his own political gain.
Within days, their case was bolstered by the release of an anonymous whistle-blower complaint accusing Mr. Trump of a scheme to shake down Ukraine for assistance and a reconstructed transcript of a July phone call between Mr. Trump and President Volodymyr Zelensky of Ukraine. During the call, Mr. Trump pressed Mr. Zelensky to investigate former Vice President Joseph R. Biden Jr. and his younger son, Hunter Biden, as well as an unsubstantiated theory that Democrats colluded with Ukraine to undermine the 2016 election.
Over a dozen interviews, and 70-plus hours of private testimony since then, investigators for the House Intelligence, Foreign Affairs and Oversight and Reform committees have begun to fill out a narrative of a president using critical leverage points at his disposal to push Ukraine. Career diplomats and foreign policy experts from within the administration have defied White House orders not to cooperate with the inquiry in order to testify to how the normal channels of foreign policy toward Ukraine were scrambled in the spring and fall as Rudolph W. Giuliani, the president’s personal lawyer, and officials loyal to Mr. Trump tried to bend the relationship between the two nations for Mr. Trump’s political benefit.

Several witnesses, including the top American diplomat in Ukraine, have testified that they were led to believe that Mr. Trump went further, withholding a coveted White House meeting with Mr. Zelensky and $391 million in security aid approved by Congress to help Ukraine fight off Russia until he got a public commitment to investigate his political adversaries.

On Thursday, even as the House took its vote, four floors below in the bowels of the Capitol, investigators questioned Timothy Morrison, the top Russia expert on the National Security Council, about assertions by others that he had witnessed Mr. Trump and his ambassador to the European Union, Gordon D. Sondland, make clear within the American government and to the Ukrainians that they expected a public pledge for investigations before the security assistance would be released.

Republicans have participated in the questioning throughout, and argue that there has been no firsthand evidence of a quid pro quo. Mr. Trump’s defense has been more blunt force, describing the inquiry as a “coup,” branding veteran officials who have cooperated “Never Trumpers,” and accusing Democrats of lying about what took place as he insists over and over again that his call with Mr. Zelensky was “perfect.”

Democrats have indicated that the next phase could move just as swiftly, if they are not derailed. With Thursday’s Halloween vote behind them, party leaders are aiming to conclude public fact-finding hearings in the Intelligence Committee by around Thanksgiving. The Judiciary Committee would then have several weeks to draft and debate articles of impeachment before a possible House vote on impeachment before Christmas.
The House is scheduled to recess for one week beginning Friday. Lawmakers leading the impeachment inquiry intend to use that time to begin to wrap up closed-door witness depositions with government officials. Their targets remain ambitious, if perhaps unattainable, including John R. Bolton, Mr. Trump’s former national security adviser, and top White House lawyers who helped lock down a summary of the July phone call with Mr. Zelensky.
They want to waste little time once they return, convening public hearings in the Intelligence Committee the week of November 11 with key witnesses who have already provided testimony out of public view.
ADVERTISEMENT
The resolution adopted on Thursday lays out rules for those hearings, directs the Intelligence committee to produce a public report of its findings and authorizes it to share all evidence collected with the Judiciary Committee. It is in that panel that lawmakers from both parties will weigh the strength of the evidence and debate whether it amounts to high crimes and misdemeanors.
As in past impeachment inquiries, the procedures grant Republicans on the Intelligence and Judiciary committees the ability to recommend subpoenas and witnesses, though they can be overruled by a vote of the full committees. And they allow Mr. Trump’s legal team to propose witnesses to the Judiciary Committee, cross-examine witnesses the panel calls and publicly present a defense. Those rights may be abridged, however, if Democrats determine that Mr. Trump’s legal team is obstructing the inquiry — a charge they have repeatedly leveled so far.