ALERT: You can now report any corrupt public officer through FLAG’IT app 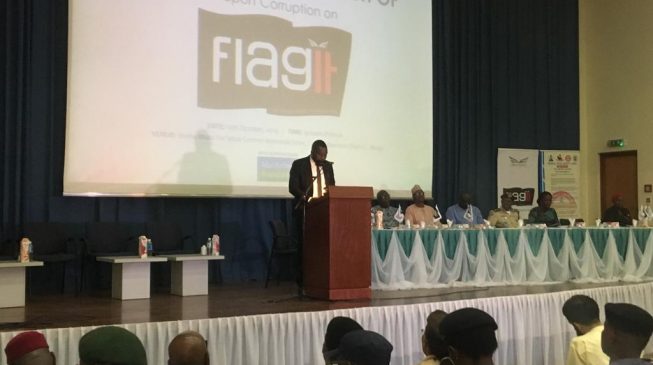 The Akin Fadeyi Foundation has launched FLAG’IT, a mobile application through which Nigerians can report corrupt practices.
The application, which can be downloaded here, enables citizens to report and to document their experiences around corruption as well as capture evidence of corrupt practices by public officers.
ADVERTISEMENT
The foundation said it also enables Nigerians to “engage with government officials on issues bordering on service delivery”.
In March, Ibrahim Magu, acting chairman of the Economic and Financial Crimes Commission (EFCC), said at least N1.3 trillion public funds was diverted between 2011 and 2015, while corruption in the power sector alone has reportedly gulpedN11 trillion since 1999.
At the launch which was held in Abuja on Thursday, Fadeyi, executive director of the foundation, said the application was designed to enable the opening up of government institutions for transparency and accountability.
Fadeyi, who was represented by Simon Kolawole, founder of Cable Newspaper and chairman of the foundation’s board of trustees, said the application is the latest of their advocacy innovations to “empower Nigerians to demand accountability, transparency and excellent service delivery”.
He said the innovation, which involves partnership with the Federal Road Safety Corps (FRSC), also enables Nigerians to document their positive stories about “outstanding public officers and excellent service delivery”.
“At the Akin Fadeyi Foundation, we have set a goal to ensure that Nigeria becomes that country where everyone lives fulfilling life and are able to utilise their human and social capital to the full extent,” he said.
“For every naira that is stolen, there is a negative impact on the society. We are aware that the culture of corruption has become so endemic and difficult to tackle.
“If we must end it, we must start by talking to the man in the mirror and ask, ‘what is my role in defeating corruption and rebuilding the Nigerian nation of our dream.”
He also spoke of the foundation’s other advocacy efforts including continued collaboration with public institutions such as the Open Government Partnership, the European Union, United Nations agencies, Independent Corrupt Practices and Other Related Offences Commission (ICPC), the Nigeria police and the media.
In his remarks, Kole Shettima, director, Africa office, MacArthur Foundation, lauded the application which challenges “us all of us to think about our own role in the society”.
“As citizens, we also have a role to play in fighting corruption which disproportionately affects the poor,” he said.
ADVERTISEMENT
“The poor are the ones who actually pay for corruption in this country in terms of education, health and other areas because they don’t have the power and resources to overcome the challenges of corruption.
“We work with the assumption that all public officers are not necessarily corrupt but they need the support they can get in carrying out their functions. Anybody, given the opportunity, can make a difference.”