Bill Gates: Melinda and I are lucky to have Dangote as a friend 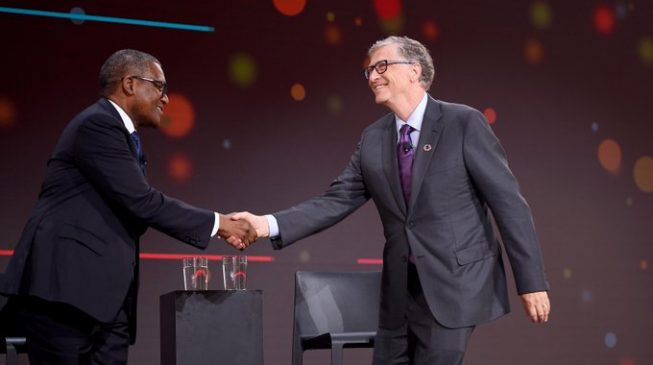 Bill Gates, co-chair of the Bill and Melinda Gates Foundation, says he and his wife are lucky to have Aliko Dangote, Africa’s richest man, as a friend and partner in battling development issues in Africa.
In a note via his blog, Gates said Dangote Foundation is the largest organization in sub-Saharan Africa tackling health and education.
ADVERTISEMENT
The world’s richest man for 18 years also highlighted the similarities between himself and Dangote — both in business and charity.
“Have you ever met someone new and immediately felt like you could talk to them for hours? That happened the first time I met Aliko Dangote. A couple years ago, he and I ended up going to the same event in New York,” Gates wrote.
“A mutual friend suggested that I meet him because he knew we were both super interested in global health. So we made sure to sit next to each other at dinner.
“As soon as we shook hands, it was clear we had a ton in common. We both started successful businesses in the late 1970s. For our second act in life, we both chose to start foundations aimed at improving health and education. (Today, the Dangote Foundation is the largest such organization in sub-Saharan Africa.)
“More importantly, we both love to geek out over things that make some people’s eyes glaze over, like cement, fertilizer, and iodized salt. Check out this video of Aliko’s recent visit to our foundation’s office in Seattle for proof:
“That first meeting sparked the beginning of a fruitful friendship. In 2016, our foundations announced a joint, five-year $100 million commitment to reducing malnutrition in Nigeria.
“Malnutrition is the greatest health inequity in the world. It’s responsible for nearly half of all under 5 deaths in Nigeria (and around the world). Even if you survive to adulthood, your chances of dying are much higher, and your quality of life is greatly reduced.”

Gates went on to speak on how both foundations are working to add more nutrients to food consumed across the country.
“One of the ways our foundations are working together to fight malnutrition is through food fortification. Kids often become malnourished when they don’t get enough micronutrients—vitamins and minerals—to digest their food properly. One way to correct this is by adding micronutrients to the food that families—especially those from low-income households—are purchasing every day.
“When you go to a grocery store in the U.S., a lot of food already has this fortification. Think iodized salt, or milk that comes with extra vitamin D and calcium. By introducing additional micronutrients to the food people are already eating, you can improve health without changing any habits.
“Our foundations are now working together to find other staple foods and condiments that could be used to deliver more micronutrients to more people in Nigeria, like fortified bouillon cubes. (I talked with Aliko about this at our Goalkeepers event in New York a couple days ago. You can watch a video of our conversation here.)
“Improving health in Nigeria is critical to making progress in sub-Saharan Africa. The country is home to nearly a quarter of all people living in sub-Saharan Africa, and that population is only going to grow in the future. By solving problems in Nigeria, you can have a huge impact on all of Africa.
“Aliko Dangote understands this, and that’s why he’s committed to making progress in his home country. Melinda and I are lucky to have him as a partner (and friend!) in improving health.”
ADVERTISEMENT
At Goalkeepers Summit last week, Dangote said he would love to be like Bill Gates, giving a chunk of his wealth to charity.