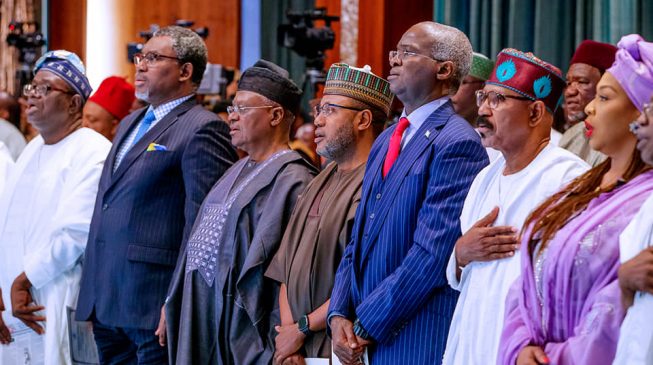 President Muhammadu Buhari has ordered all cabinet members and heads of government agencies not to embark on any foreign trip till the defence of the 2020 budget at the national assembly is over.
Willie Bassey, director information in the office of secretary to the government of the federation, disclosed this in a statement on Friday.
ADVERTISEMENT
He said the suspension of such travels will enable the ministers and heads of agencies provide the information the legislature needs to pass the budget.
“Sequel to the presentation of the 2020 Appropriation Bill by Mr President to the National Assembly, President Muhammadu Buhari has directed the immediate suspension of international travels by all Cabinet Members and Heads of Government Agencies so as to enable Honourable Ministers personally lead the process of Budget defence at the National Assembly,” the statement read.
“The suspension of such travels will enable Functionaries and Agencies of the Executive Arm to provide the required cooperation with the Legislature in order to ensure timely passage of the Appropriation Bill.
All foreign trips approved before the directive were cancelled while the ministers affected were asked to revalidate their approvals.
“Honourable Ministers who have already secured approval to travel are by this directive, required to revalidate such approvals with Mr. President after confirming the Schedule of Appearances with the relevant Committees of the National Assembly,” the statement read.
“Furthermore, all Ministries, Departments and Agencies (MDAs) have been directed to liaise with the relevant committees of the National Assembly for their Schedules of Budget defence.”
Buhari had presented a N10.33 trillion budget to the lawmakers, the first spending plan of his second term.
He had expressed the wish that the budget would be passed on time to enable its implementation between January and December.
ADVERTISEMENT
The national assembly had listed delay of budget defence as one of the reasons of not passing budgets as and when due.