A Nigerian lady has stirred up the hornet’s nest on social media platforms following false accusations of rape levelled against a man.
Cynthia, the lady in question, had raised a dust on Twitter in September, after she accused the man of attempting to rape Anita, her friend.
ADVERTISEMENT
She had also claimed the man attempted to forcefully have carnal knowledge of her friend on two occasions and warned ladies to steer clear of him. 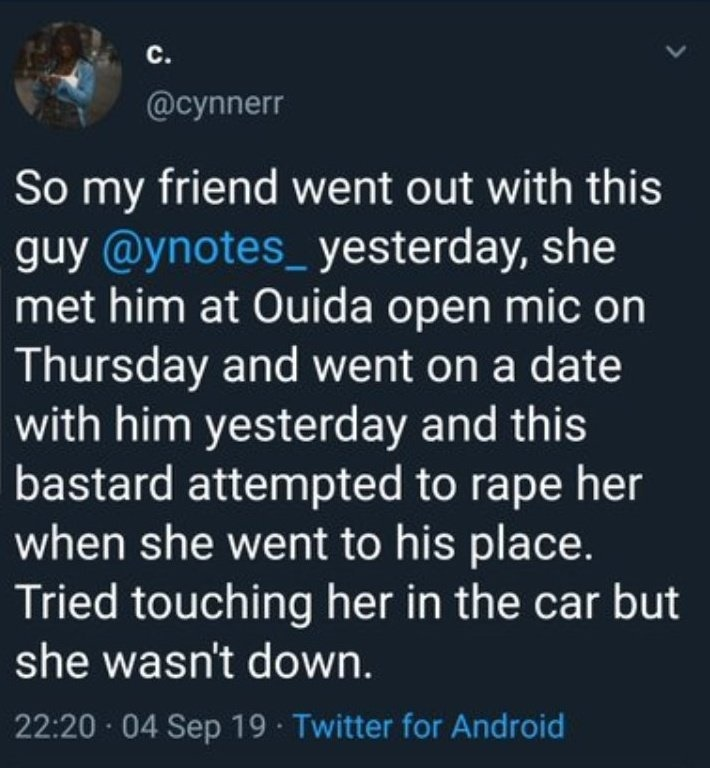 Following the reactions that trailed the accusations, the suspect was said to have sought legal action against Cynthia.
But on Sunday, the accused, using the Twitter handle @ynotes_,  shared recordings of conversations between himself, Anita, Cynthia and Tega, another friend of theirs.
Tega served as a mediator as they attempted to settle out of court.
“Before now, it was my words against theirs but now I’ve got @cynnerr apologizing privately (3rd tweet) & @_Eggovin admitting the fact that they both lied (8th tweet),” he wrote in a series of tweets.
In the recordings, Cynthia is heard explaining that it was just a misunderstanding. While apologising, she also appears unwilling to retract her statement for fear of online criticism.
This has, however, sparked outrage on the microblogging platform as users have registered their annoyance at Cynthia.
Despite Anita’s claim that Ynotes altered the recordings to suit his narrative, her comment did nothing to abate the backlashes on social media.
As of the time this report was filed, Cynthia and Anita’s accounts were locked, preventing users who are not following them from accessing their feeds.
“Cynthia must go to jail for false rape accusation!,” one Twitter user wrote.
“So some people are saying Cynthia shouldn’t go to jail because “ShE is 19” or “she doesn’t understand herself” Just a few years in Kiri Kiri, she’ll definitely understand herself. It’s called a correctional facility for a reason, that her head wey no correct go correct by force,” another Twitter user said.
ADVERTISEMENT
“I’m not sure this Cynthia understands the damage here. Firstly she tarnishes the guys image and refuses to retract her statement, the other side of this whole lying thing spoils the credibility of women who have actually been rape,” said a user.
Here is what some Nigerians had to say:

Anyway, I'm going to sleep.
This Cynthia drama is what happens when your feminism is centred on hating men or making women's rights and freedom about men.
Everyday, men this men that. Angry, loud, mess devoid of coherent thought and NUANCE.
— So, I'm… (@Nonso___) October 14, 2019