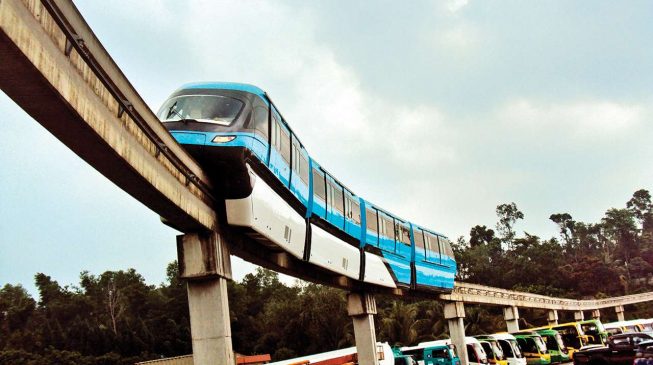 Ten years ago, news surfaced on the internet that a Nigerian engineer had won a $500 million contract to construct a monorail in Iraq.
Fast forward to 2019: the news is back again — the same Nigerian engineer was awarded a $500 million contract to construct a monorail in the same Iraq.
ADVERTISEMENT
Nigerians have been celebrating the “feat” on social media as a counter narrative to the soiled image of their compatriots abroad.
The contract, said to have been awarded to TransGlobim International described as a Canadian consortium chaired by Jude Igwemezie, a Nigerian, was reportedly for the construction of “a viable rail transportation network” for the Iraqi city of Najaf. The network was to connect three Islamic holy and historic mosques in Imam Ali, Kufa and Sahle.
Igwemezie was quoted to have said the project was billed to be completed in three years and would be built in two phases. The first phase, he said, would cover the design, construction and operation of the system while the second phase would involve the expansion of the system and its extension to the Najaf airport and the final phase.
To date, there is no record that such a project was built but different websites have reports on what they described as the accomplishments of Igwemezie. Stories giving the impression that while Igwemezieeasily got a contract award in Iraq, the Nigerian authorities frustrated the “Canadian-trained” engineer back home are circulating on social media. The title of one of such reports read: “Nigerian Build Monorails Abroad While FG Enriches Chinese Coys”.
Igwemezie reportedly claimed that he had been involved in negotiation with Nigerian officials for several years months to construct several rail lines in the country without luck. 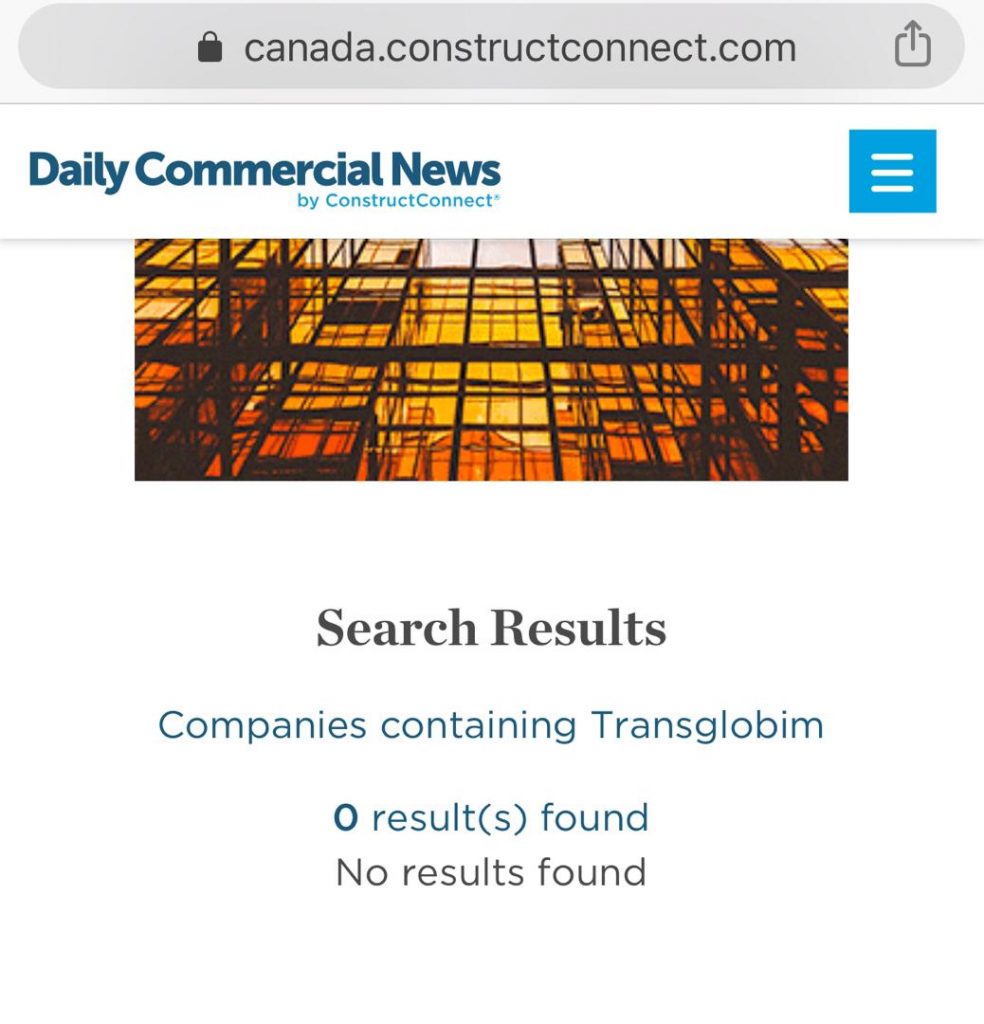 A search for “TransGlobim International” in a directory on Canadian construction firms came up with zero result
Another report read: “Mr. Igwemezie, who said he has been involved in negotiation with Nigerian officials in the last 18 months to construct several rail lines in the country, disclosed that it took ‘only two months to get the Memorandum of Understanding (MoU) executed with Iraqi officials.’
“Hinting at his frustration to offer his services to Nigeria, Igwemezie said, ‘as a Diaspora person, I kept coming back, knocking, to help Nigeria. On the other hand I can’t knock forever.’”
Olushola Olufola, a Twitter user, also wrote: “I have a friend who for 4yrs has been negotiating to build a fully self funded $3b rail line in Nigeria. He has met everyone in authority yet to way. How engineer Jude Igwemezie got juicy railway contract in Iraq after being frustrated in Nigeria.”

I have a friend who for 4yrs has been negotiating to build a fully self funded $3b rail line in Nigeria. He has met everyone in authority yet to way.
How engineer Jude Igwemezie got juicy railway contract in Iraq after being frustrated in Nigeria https://t.co/jZWrMaUOgU
— Olushola Olufolabi (@olushola_shola) October 3, 2019

THE CONTROVERSIES
Checks on TransGlobim website did not show previous projects undertaken by the consortium that could prove they have the capacity to take on the Iraqi project. Although TransGlobim posted pictures from the “signing of a memorandum of understanding (MoU)” on the Iraqi project, the authenticity of the website which had different pictures of Igwemezie is in doubt. None of the telephone lines on the website was available when TheCable attempted reaching the company on Friday. It was also observed that the website had not been updated recently. 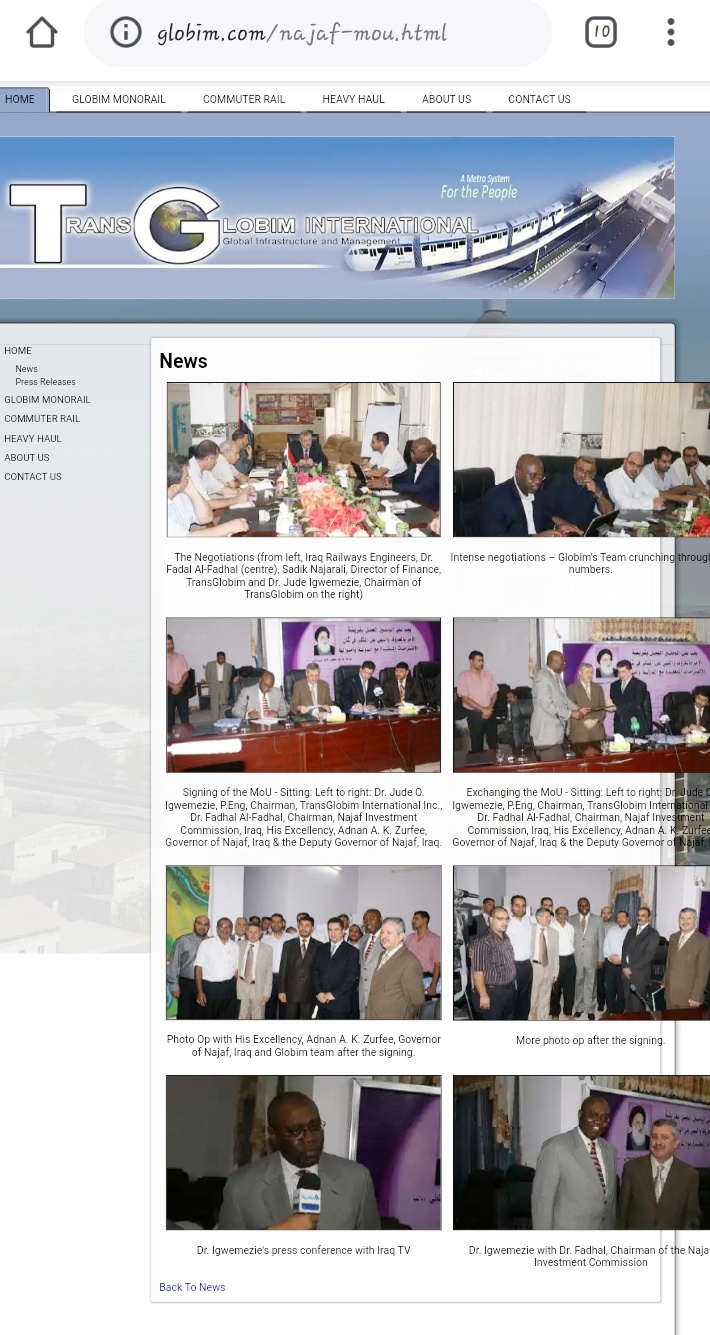 Screenshot of a photo section on the site
Also, a search of the company’s name on Canada.constructconnect.com, a website of Canadian construction companies, did not produce any result. Applied Rail Research Technologies (ARRT), a supposed engineering consulting arm of the company, was also not found on the directory.
On the website of Iraqi’s National Investment Commission, the only monorail project listed was that of “Karbala-Najaf ” but there were no details. Neither the National Investment Commission nor TransGlobim responded to TheCable’s inquiry. While both parties may have signed an MoU, there is no available information to show the project was executed.
In a 2012 report, one Middle East Business Intelligence said the monorail contract was stalled owing to lack of finance.
Transglobim was said to have undertaken to finance and operate the monorail network for a period of 30 years.
Further checks showed a report on an MoU which the government of Abia signed with TransGlobim to construct a monorail in 2012. Nothing has been heard of the project since then.
ADVERTISEMENT
Odimegwu Onwumere, a journalist, said his investigation into the Abia project showed “Globim people have no track record of building anything (clue to this being suspect is that a possible Nigerian is running the company).”