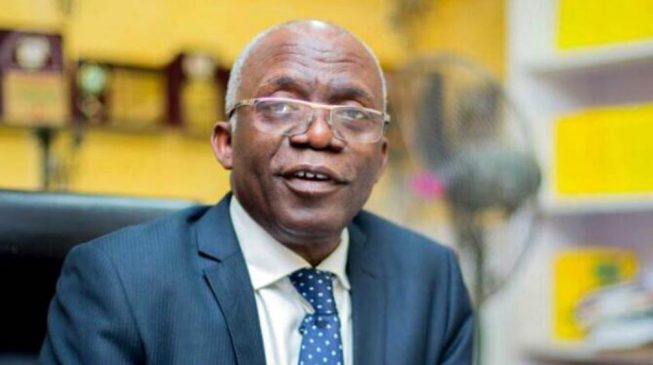 Femi Falana, a senior advocate of Nigeria (SAN), has asked the national assembly to work with anti-graft agencies for the recovery of “$103.7 billion lost on oil sale”.
In a letter to Senate President Ahmad Lawan, the senior lawyer said if Nigeria can recover the money lost to oil sale, there would be no need to seek foreign loans.
ADVERTISEMENT
Nigeria is currently planning to secure the first tranche of a $3 billion loan from World Bank in April. According to Zainab Ahmed, minister of finance,  who disclosed this, the facility is meant to improve the power sector.
But Falana said Nigeria lost a larger part of the proceeds from oil as a result of the non-implementation of the deep offshore and inland basin production contracts act.
In the letter dated October 18, Falana said in 2015, he had raised the alarm that both government and international oil companies in the country failed to stick to the agreement for an upward review of loyalties whenever crude oil was sold beyond $20 per barrel in the international market.
“In his reaction to our allegation of economic sabotage by the public officers who deliberately refused to implement the Deep Offshore and Inland Basin Production Sharing Contracts Act the immediate past Minister of State in the Ministry of Petroleum Resources, Dr. Ibe Kachukwu admitted that the non implementation of the law by some unnamed public officers had led to a loss of oil revenue of over $60 billion,” he wrote.
“But due to the reluctance of the federal government to enforce the law the governments of Akwa Ibom, Bayelsa and Rivers States instituted an action at the Supreme Court in 2016 to compel the Federal government to recover the accrued royalties.
“In the judgment delivered in the case on October 18, 2018 the Supreme Court directed the Federal government to recover the royalties that had not been collected from the International Oil Companies for the past 18 years. Based on the judgment of the apex court the Federal government has demanded for the immediate payment of the sum of the sum of $62 billion by the defaulting oil companies.
“But the affected oil companies have filed fresh suits in the federal high court challenging the claim of the federal government. It is hoped that the federal high court will speed up the hearing of the new cases in view of the categorical pronouncement of the Supreme Court on the right of the federal government to recover the outstanding royalties.
“The National Extractive Industry and Transparency Initiative (NEITI) has disclosed that sum of $22 billion and N481 billion has been withheld from the Federation Account by the NNPC and some oil companies. Without any justification whatsoever the federal government has ignored the findings of the NEITI.
“If the National Assembly, under your able leadership, is prepared to resist pressures from vested interests and muster the political will to recover the said fund Nigeria will have no business begging for foreign loans from China, African Development Bank and the World Bank. Therefore, the National Assembly may wish to collaborate with the anti graft agencies in the recovery of the said sum of $103.7 billion without any delay.”
Falana alleged that in the course of their work on leakages in the national economy, they also discovered that sometime in 2006, the management of the Central Bank of Nigeria (CBN) illegally withdrew $7 billion from the nation’s foreign reserves and fixed same in 14 commercial banks.
He said Godwin Emefiele, CBN Governor, had also ignored their demand for the recovery of $7 billion and the accrued interests from the 14 commercial banks.
ADVERTISEMENT
Apart from the expected revenue of $1.5 billion from the implementation of the amended deep offshore and inland basin production contracts act, Falana said the outstanding royalties, fixed deposit and other funds withheld or diverted from the federation account are not less than $103.7 billion.