EXTRA: God has so much hatred for unfruitfulness—to be fruitful is an ordinance, says Evangelist Enakhena 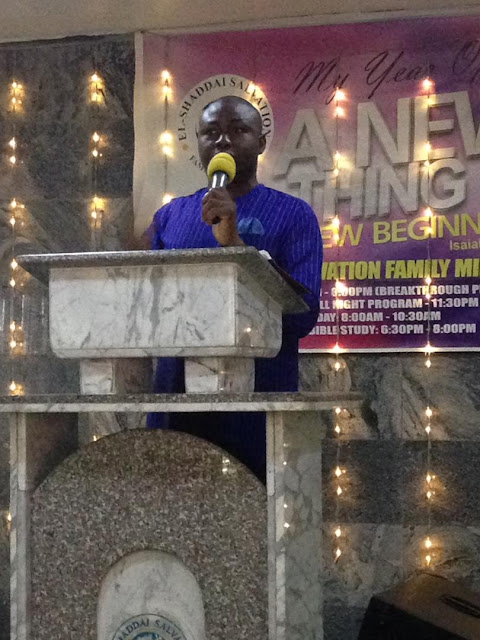 No fact is more credible than the scriptures in the incomparable book (Bible) when giving the message of God and knowing this, Evangelist Fidelis Enakhena, a regular guest minister at the El-Shaddai Salvation Family Ministries (ESFM), ensures he is never without scriptural backings when preaching God's word.

The fire-brand Evangelist who delights in praising God evidently, upped the know of ESFM members with what fruitfulness is,   the importance of fruitfulness, God's hatred for unfruitfulness and how multiplication is God's chief interest in the message titled "Be Fruitful".

Teleguided with scriptures, Evangelist Enakhena who is also a deliverance minister, elaboratedly disclosed disobedience as one of the hindrances to fruitfulness.


He said that we can disobey God in several ways when we don't obey his command and one of the areas we disobey God is unbelieve.

For further clarity and understanding, Evangelist Enakhena cited the issue of Jesus  Christ and the fig tree and shared something different that the Lord showed him.

Read the message below...

In the book of Genesis 1:28
God blessed man and said be fruitful and multiply. if you read 3 John 2  Beloved, I wish above all things that thou mayest prosper and be in health, even as thy soul prospereth. To be fruitful is not a prayer, a wish, or a prophesy but a command. Prophesy may tarry, prayers may tarry, wishes may tarry but the commands of God does not tarry. In the book of Genesis 1:3 the bible says God said let there be light — is a command and instantly there was light but when it came to fruitfulness God said be fruitful — it is an ordinance. It is already ordained. Immediately the word came out from God, it began to exist. To be fruitful means to achieve progress, success, to achieve multiplication, profit, to procreate, to yeild value, produce substance.

God is so much interested in fruitfulness. God went again to Genesis 9:1 "And God blessed Noah and his sons, and said unto them, Be fruitful, and multiply, and replenish the earth" , God has so much hatred for unfruitfulness no wonder the bible told us in Psalm 35:27  " Let them shout for joy, and be glad, that favour my righteous cause: yea, let them say continually, Let the LORD be magnified, which hath pleasure in the prosperity of his servant" , that is God for you. In Exodus 23:26  " There shall nothing cast their young, nor be barren, in thy land: the number of thy days I will fulfil ", it is a decree, again, a command. If you are here you are not fruitful that means you are not under the command of God. If you read John 15:1-2 " I am the true vine, and my Father is the husbandman.
Every branch in me that beareth not fruit he taketh away: and every branch that beareth fruit, he purgeth it, that it may bring forth more fruit.", look at Jesus Christ, He knew the importance of fruitfulness. In that same John 15:16 "
Ye have not chosen me, but I have chosen you, and ordained you, that ye should go and bring forth fruit, and that your fruit should remain: that whatsoever ye shall ask of the Father in my name, he may give it to you.". There are different areas of fruitfulness, look at your business, is it fruitful? it is not talking about procreation but soul fruitfulness. Is your soul fruitful? Is your womb fruitful? Are you fruitful mentally? Healthwise are you fruitful? Academically, ministerial-wise are you fruitful? Spiritually are you fruitful? In your career are you fruitful? In every way you find yourself, are you fruitful? The bible is talking about fruitfulness.


The word of God said His words are ye and amen. He said my word does not return to me void and every word of God is a command. The same God said I watch over my word to perform it. You may have been fruitful in your area of endeavor but God did not stop there. The Lord went further, He said be fruitful and do what? Multiply! God is interested in multiplication. That is why the bible says with one you can chase one thousand but if you multiply from one to two, you will chase ten thousand. Again, God is very much interested in multiplication. For those of us who have one child, two children and you say am okay, God is not happy with you because God needs multiplication. If you have four children, prepare for sixteen because God did not say addition...He said be fruitful and multiply. If you read the book of Psalm 127:

You are not operating under the economy of Nigeria. The population of your children makes no matter...God is a great provider...He knows how to feed them. pronouncement: As many that wants to multiply, you will multiply! in your business, career, academics, mentally you will multiply in the name of Jesus Christ. But you see when God is talking about fruitfulness, fruitfulness has hindrance. When you read the book of Deutronomy 28:1-14, it tells us about the promises of obedience. One of the hindrance to fruitfulness is disobedience to the word of God. The bible say that when you are obedient to me you will eat the good of the land. It says blessed shall thou be in your going out and blessed shall thou be in your coming in. The bible said you will be the head and not the tail. The bible said that your basket will be full, it said everything you touch shall prosper but from verse 15 the Lord said if you disobey me. So one of the problems that we have that causes hindrance to our fruitfulness, is disobedience.


We can disobey God in several ways when we don't obey his command. One of the areas we disobey God is unbelieve. You don't believe in what God can do, you don't in what is written in the scriptures, you don't believe that what happened in the days of old can happen now. That is why Jesus Chirst was always telling Satan: it is written — in other words, Jesus Christ believed. Jesus Christ believed and He said to Satan: it is written. Disobedience.

If you read the book of Malachi 3:8-12, the bible said God gave a command that you pay your tithe and offering, and He will open the windows of heaven and He will give you to the extent that your storehouse cannot carry it. But it says when you disobey, He said He will send a devourer to you. Many people think they are prospering when they are not paying their tithe but they are not prospering. How do I know that person is not prospering? God does not just judge you instantly when you have not paid your tithe, He will wait for you to gather a lot until a day your business fire will gut it and it will crash down and you will start afresh or one day you will do a business transaction and somebody will carry your money away or even after a transaction with somebody and he or she says I will come tomorrow and he or she dies before that tomorrow, better yet armed robbers can just come and sweep off all you have gathered. When God wants to send a devourer, He waits for you to accumulate everything and after accumulating it all, He sends a devourer. God sends away a devourer from you when you are fruitful. The book of proverbs says a little that the poor man has, is better than the riches of a fool and the bible also told us that it is only fools that says there is no God. Show me a man who says there is no God and I will show you a man that is a fool. How do you know those that say there is no God? They are the people who don't obey the command of God. If you want to multiply, fruitful? prove God in His word. Has God said anything concerning you? prove Him, do that thing. Did God say you will not be sick? Then prove God and see Him. He said serve me and I will bless your water and wine. He said the sickness I put on the Egyptians, I will not put them on you. So when you disobey and don't have believe you cannot be fruitful. Fruitfulness belongs to the people who obey God's words. Pronouncement: In the name thatcis above every other name, the power for you to be fruitful shall be released unto you in the name of Jesus.

If you read the book of Mark 11:12-25 the bible said Jesus Christ was on His way to a temple and they were hungry so He saw a fig tree. This fig tree pretended to be fruitful, it pretended about everything but something happened when Jesus Christ  got to it He discovered that the fig tree was barren and was pretending to be fruitful and the Lord placed a curse on that fig tree. And when they were returning Peter said to Him, Master look at the fig tree you cursed it has dried up. Peter was awed at the know of Jesus's powers saying to himself He cursed the fig tree and it dried up within a day. But the Lord showed me something different from that scene. He said Jesus Christ cursed the fig tree in order to teach the disciples that if you refuse to be fruitful as a worker, minister, disciple, you are under a curse. So if you are in a church of God you are not doing anything or  you are a worker you are not fruitful from January to December, you are a cursed person. Jesus Christ was telling them that if thou haveth faith as small as a mustard seed, you can say to a mountain be thou move and it will obey you. So if you want to be fruitful, if you don't want to leave under a curse, be fruitful.