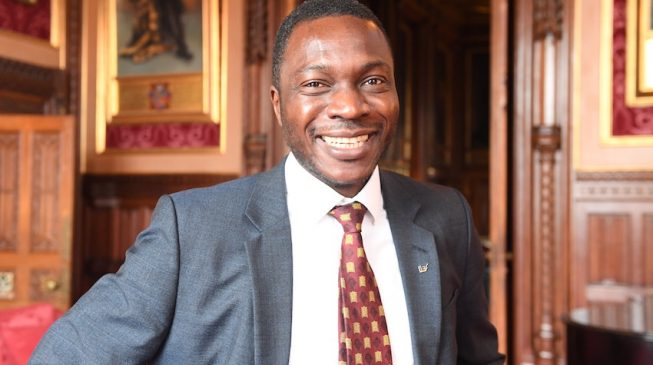 On Tuesday, Nigerian-born Ugbana Oyet was appointed sergeant-at-arms in the British house of commons. His appointment followed the retirement of Mohammed Kamal El-Hajji. Born in Nigeria 43 years ago, he moved to the UK in 1991, when he was just 15 years old.
HAILS FROM ANDONI LGA IN RIVERS
Oyet is from Andoni local government area of Rivers state where Uche Secondus, national chairman of the Peoples Democratic Party (PDP), Nigeria’s main opposition party, hails from. In his new role, he will run a team of 70 staff, covering the sergeant’s office, the access team, and doorkeepers. As sergeant-at-arms, Oyet will be responsible for ensuring order in the house of commons. The speaker can call on him to escort people out of the chamber.
ADVERTISEMENT
While reacting to the appointment, Oyet said it is a great honour serving in that capacity.
“It is a great honour to serve in such a historic role, which combines the needs and challenges of the modern era, while also maintaining the dignity and essential traditions that have helped parliament endure,” UK parliament website quoted him as saying.
“I’m a real people-person and love working closely with MPs, staff and members of the public, so I will do my best to enhance morale and improve the excellent service already provided by the sergeant’s office.”
AN ENGINEER
Before his latest appointment, Ugbana served parliament’s principal electrical engineer and programme director for the estate-wide engineering infrastructure and resilience (EWEIR) programme. His work aimed to make the parliamentary estate carbon neutral by 2050.
As programme director for EWEIR, Ugbana reduced the cost of providing emergency electrical power to the parliament’s estate from £1m to £275,000 a year.
KNOWN FOR MULTI-BILLION POUND PROJECTS
As a chartered engineer, he has a strong track record of delivering multi-billion pound projects.
In 2009, he delivered a £1.8bn village complex and gated community in Abu Dhabi in time for the first grand prix.
Oyet has also delivered a power station and desalination plant worth tens of billions of pounds.
MARRIED TO HIS CHILDHOOD FRIEND
Ugbana is married to Claire, his childhood sweetheart, whom he met at school in Chichester.
They have four children – three – sons and a daughter aged between 14 and 23.
In his spare time, he plays basketball with his sons in their local team and sings with the St Mary’s Undercroft choir at one of the staff carol services in the speaker’s house.
The Voice, an online platform in the US, quoted John Bercow, speaker of the house, as saying he had always been impressed by Ugbana’s ability and attitude.
ADVERTISEMENT
“I have known Ugbana for several years and have always been impressed by his ability, his attitude and his approach to other people,” Bercow was quoted to have said.
“My longstanding impression of him was confirmed when he won a diversity and inclusion award for being an ‘an inspiring role model’.”