IBB’s son: June 12 will haunt my father for life 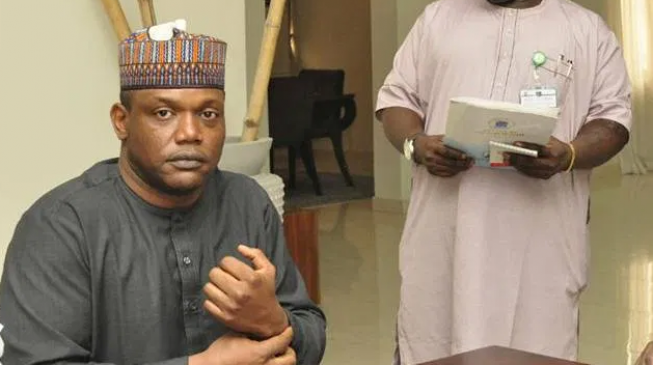 Mohammed Babangida, eldest son of former military president of Nigeria better known as IBB, says his father told him that the annulment of the June 12, 1993, election will haunt him for the rest of his life.
The annulment plunged Nigeria into chaos and MKO Abiola, who was coasting to victory as of the time the election was cancelled never recovered from the crisis as he was incarcerated and died shortly before he was to be released.
ADVERTISEMENT
In an interview with The SUN, Babangida’s son narrated what happened on the night his father had a date with history.
“We were at the (Aso Rock Presidential) Villa at the time. We were in the living room when he had done the recording. He came and he said, ‘I just annulled June 12.’ We both looked at each other and we looked at him, and said: why would you do that?” he said.
“And he said ‘you are too young to understand the intrigues of governance.’ And we said, but it is about you and your administration. And he said, ‘well, perhaps, this is something that will haunt me for the rest of my life.’
“So, you could see that his hands were tied. He was limited. He couldn’t do what he would have wished to do. And this is probably a story most Nigerians don’t know… we all understood that it would be one of the biggest things that would remain as something that would haunt us for the rest of our lives. We understand that. But I am sure deep down, my dad would have passed on the mantle of leadership to his friend. There is no doubt about that.”
He said Nigerians ought to have moved on from the mistake, highlighting the compensation President Muhammadu Buhari made to Abiola.
The retired general’s son also said some people from the south-west region benefitted from the annulment, saying those were the positive sides to it which people hardly talk about.
“To me, mistakes have happened, (what matters) is how you rise above those mistakes. We have learnt as a country. There have been tremendous benefits for some group of people who benefitted from that mistake, who are in the helm of affairs currently today,” he said.
“Because it was from that, that you saw the south-west become so strong and is now developed to a point whereby their leader was able to create a bloc for the region where most of his protégés were in leadership positions at that time. And these were people who benefitted from the annulment of June 12.
“So, there was always the positive side of that annulment which gave rise to what we are saying today. In as much as it was a painful experience, the nation has, I think, grown out of that by now; and we have mended fences from that hurt. The president now has been able to recognize the family, he has been able to cool the tempers, and we hope from that, we should just be able to move on. That is just my position.”
He also spoke on the 1990 coup which he described as the scariest moment of his life.
“I think there are a few. But the one that scared me, and that I would remember most was the attempted coup of 1990; the Major Gideon Orkar coup. I was away and the family was in Lagos. I was out of the country at that time,” he said.
“So, you can imagine not being there when all this was going. You are able to have information. You are not able to make contact with your parents; your family. And you are just in a foreign land; totally on your own. Many thoughts were just racing through my mind at that time.
ADVERTISEMENT
“And the fact that I was not able to make contact with them for at least 24 hours created a lot of panic and anxiety in me. That remains, perhaps, the most serious moment of my life. Those were the longest 24 hours of my life. They were the most anxious. That remains one of the scariest moments in my life.”