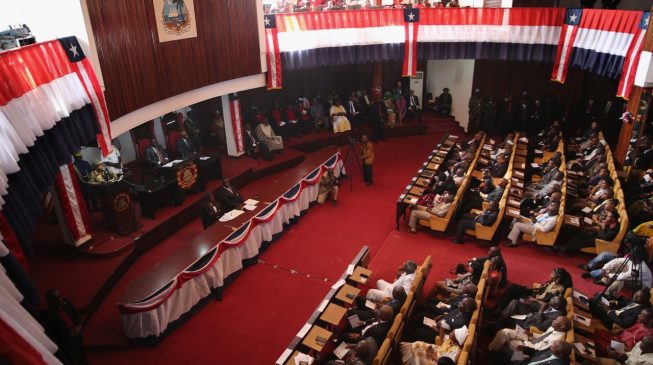 Liberia’s house of representatives has voted to slash its monthly earnings by 31 percent and that of the senate by 36 percent.
The lower legislative chamber voted in favour of the cut when it recently passed the country’s draft national budget of $526 million for the 2019/2020 fiscal year.
ADVERTISEMENT
FrontPageAfrica, a Liberian magazine, reports that the house said it slashed the lawmakers’ salaries and benefits to accommodate the pay of government workers, including about 1,200 health workers.
It said the cut was also to realise its projections, avoid the recurrence of budget shortfall as well as meet the International Monetary Fund (IMF) standards.
The report of the joint committee on ways, means, finance, and public accounts and expenditure also indicate the house removed the $7 million contingent revenue as was initially provided for in the budget.
The report reads: “By this, the Committees with the mandate of Plenary instituted a national action that led to the proposed reduction of all employees’ salaries by six percent in the Executive excluding teachers, medical and security personnel, and those earning US$500 and below, while members of the National Legislature will have a reduction of 31 percent or US$2,586 (for House of Reps.) and 36 percent or US3,600 (for the Senate) net of monthly income tax for salaries and allowances, and other reductions to include 50 percent cut in gasoline distribution, so as to address compensation gap.”
LIKE LIBERIA, LIKE ITALY — BUT WHERE IS NIGERIA?
Only recently, Italy’s parliament approved slashing the number of its members by 37 percent.
Amid the cost-saving initiatives, Nigeria’s federal lawmakers, said to be among the highest paid in he world, continue to face criticisms for earning huge sums in a country currently the poverty capital of the world.
A senator earns N13.5 million as running cost monthly while a member of the house of representatives is said to earn N12 million monthly.
Rochas Okorocha, senator representing Imo west, recently said Nigeria does not need 109 senators and 360 members of the house of representatives.
ADVERTISEMENT
He told his colleagues that the number should be slashed by 70 percent.
TheCable had reported how over N70 billion was spent as running cost for senators in the 8th assembly.