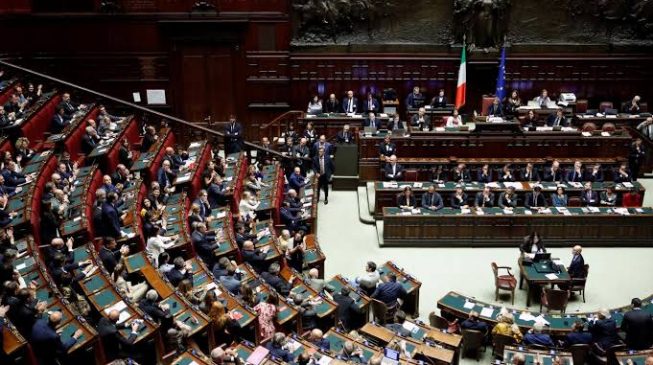 Italy’s parliament has approved slashing the number of its members by 37 percent.
The BBC is reporting that Italy’s lower house passed a new law to cut the number of representatives in both chambers “to save cost”.
ADVERTISEMENT
The law, passed on Tuesday, will see the number of parliamentarians in the lower house reduced from 630 to 400 while senators will be reduced from 315 to 200.
With each MP and senator said to be earning €230,000 and €249,600 respectively annually, the cut is expected to save Italy about €82 million every year.
Five Star Movement, the main party in Italy’s governing coalition which had promised the cut, was quoted as saying the measure will streamline parliament and save an estimated €1 billion.
Riccardo Fraccaro, cabinet secretary, also said the reduction in the number of MPs is for the benefit of the ordinary citizens.
“It’s the day we’ve been awaiting forever. After almost 30 years of broken promises, the cut in MPs and senators is a reality,” he reportedly said.
“A new political season is starting, now the citizens are at the centre.”
The new law, which is to be subjected to a referendum before taking effect, is however, not widely approved of.
The BBC quoted critics as saying it will “weaken democracy and increase the influence of lobbyists”.
The initiative by the Italian parliament comes amid clamour for Nigeria’s federal lawmakers to make some adjustments in their numbers or in their pay to reduce the cost of governance.
A senator earns N13.5 million as running cost monthly while a member of the house of representatives is said to earn N12 million monthly.
Rochas Okorocha, senator representing Imo west, recently said Nigeria does not need 109 senators and 360 members of the house of representatives.
He told his colleagues that their numbers should be slashed by 70 percent.
“What (are) three senators doing that one senator cannot do?” Okorocha had asked.
ADVERTISEMENT
“Here, we have three senators per state. Over there (house of representatives), over there, we have 360 eligible human beings. This country must begin to make sacrifices and cut down the cost of governance.”
TheCable had reported how over N70 billion was spent as running cost for senators in the 8th assembly.