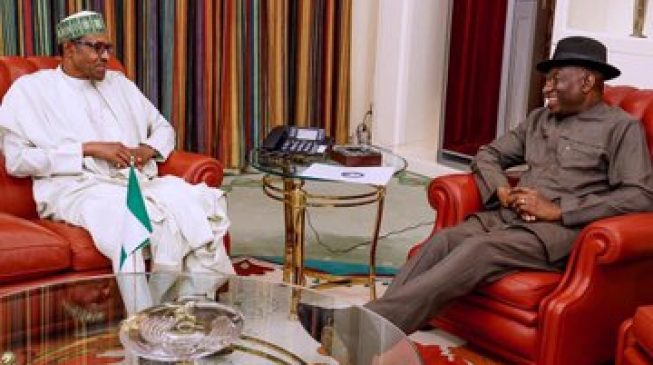 Ex-President Goodluck Jonathan did not entertain questions from state house correspondents after meeting President Muhammadu Buhari at the presidential villa in Abuja on Thursday.
The meeting, which lasted 15 minutes held at the president’s office. Jonathan arrived at the forecourt of Aso Rock at 2:58pm.
ADVERTISEMENT
At the end of the meeting, Lawal Kazaure, chief of protocol at the presidential villa, escorted Jonathan to his car.
This is Jonathan’s first visit to Buhari during the second term of his successor.
Under Buhari’s first term, Jonathan paid two private visits to Nigeria’s seat of power.
This is the first public appearance of the former president after the reports of the allegation against him by David Cameron, former British prime minister, went viral.
ADVERTISEMENT
Cameron had said Jonathan prevented UK troops from rescuing some of the 276 schoolgirls Boko Haram abducted from Chibok, Borno state but the Nigerian leader denied this, saying Cameron was against him because he signed the anti-same sex marriage bill into law.