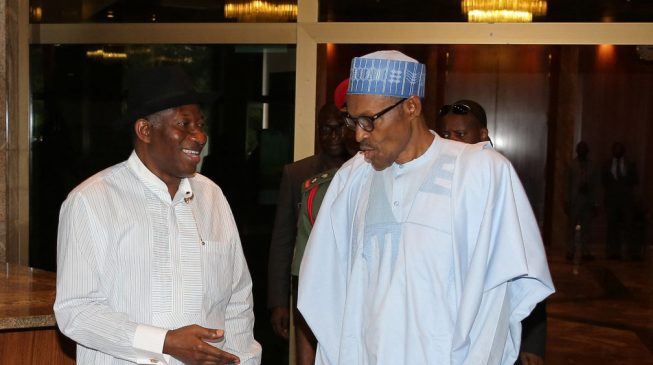 Former President Goodluck Jonathan says he has no regret conceding the presidential election of 2015 to President Muhammadu Buhari.
Jonathan who was the incumbent at the time polled 12,853,162 votes – 2.5 million less than – Buhari’s 15,424,921 votes.
ADVERTISEMENT
He made a historic call to Buhari, before the final collation of results, conceding the election.
Responding to a question by TheCable if he regrets conceding the election in 2015, considering some unsavory developments in the past four years, the former president said he has no regrets for his action because it was a sacrifice for Nigeria’s democracy.
“Let me thank the young man (Fredrick Nwabufo) from Nigeria for asking me that direct question. Let me put it very clearly. If I have the opportunity in a similar circumstance, I will do exactly the same thing,” he said at the constitutional term limits summit in Naimey, Niger.
“I always say that if you want to take a public office you should be ready to make personal sacrifices. If you are not ready to help people, then you have no business going into politics.
“What we should also know the process of building a society. People die in the process of a building a society.
“I have no regret up to this time, no matter the circumstances, I have no regret because what I did will continue to shape political discussions, not only in Nigeria but across the continent.
“Some people may not appreciate it, but as we continue to strengthen democracy, people will begin to look at conducts that are acceptable and some that are not.
“If the little contribute I have made will help to improve our democracy in the country and on continent, yes, I will do the same thing again.
“Some people raise the issue of people around the president, how do you manage them because there is the tendency for such people to influence the president negatively.
“A classical example is what happened in the Gambia. There was a former military head of state who became a civilian president. He now encouraged election. When that election was to take place, people thought he would manipulate the system. Somehow he lost the election, and the voting margin was very narrow, but he conceded that election.
“But the chairman of the political party that won the election issued a statement threatening to probe Jammeh. And the man was afraid. ‘ I’m still sitting here and they want to probe me already. Ok let’s fight’. He said he was no longer going to accept defeat.
“So people around a president can really cause crisis. Remember in my book, during that transition period people around wanted to collapse the beautiful thing we were doing.
“Buhari and I were in talks. And when the issue came up, I called him and we resolved it and we moved on. I agree, people around a president can make one suggestion or the other that can influence him negatively.
ADVERTISEMENT
“People like that will always be there. But a president must be ready to resist from being pushed to a direction they don’t want to go.”