Jonathan: When you make a president god, don’t expect him to leave 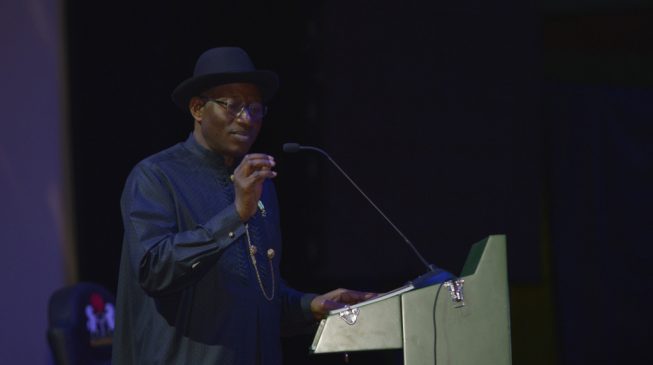 Former President Goodluck Jonathan says sit-tight rulers are enabled by people who praise and worship them as gods.
Jonathan said this on Thursday at the constitutional term limits summit, which is being covered by TheCable, in Naimey, Niger Republic.
ADVERTISEMENT
He also said some presidents hold on to power for fear of persecution and over uncertainty of what life after office would be like.
“Let’s create an environment where people will believe there’s life after office. That if you leave office you should not be persecuted,” he said.
“The way we manage ourselves as sitting presidents and former presidents matter. The first line is to reduce what will make a sitting president afraid to leave office.
“Africans sometimes, we are our own problem because we always think our presidents are little gods. That somebody is president does not mean he is God. We have a tradition of praise-singing. We tend to give our presidents name they don’t deserve.
“We tend to over-praise sitting presidents and make them think they are little gods. When they begin to make a sitting president think he is God, and he is the only person that can run the affairs of the nation; then the person will be there; nobody removes God.
“When you make a president feel he is god, don’t expect him to leave. The media and civil society must continue to admonish characters that make presidents think they are the best thing to happen.
“That you are president does not mean you are better than others. We citizens of this continent create little gods, and God cannot leave (power).”
ADVERTISEMENT
Jonathan is one of the speakers at the summit organised by the National Democratic Institute (NDI).