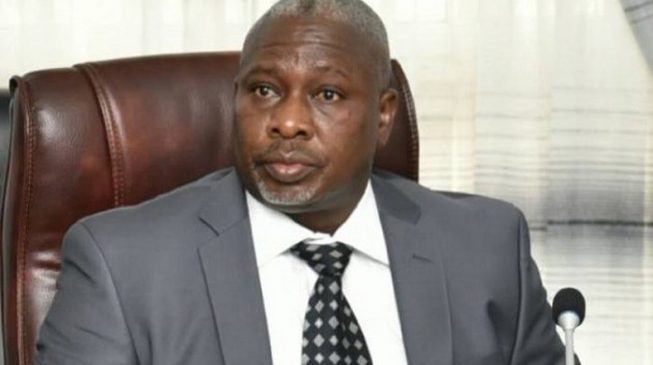 The Kogi state house of assembly has removed Simon Achuba, deputy governor of the state.
Achuba was removed after the committee set up to investigate the allegations of misconduct levelled against him submitted its report.
ADVERTISEMENT
The seven-man committee submitted the report to Mathew Kolawole, speaker of the assembly, on Friday.
Kolawole lauded the committee for “doing its assignment without yielding to interference from any quarter”.
The house later went into a closed door session where the report was deliberated upon.
Moments later, Abdulahi, representing Ajaokuta state constituency, said Achuba was impeached after a careful consideration of the report submitted by the committee.
He said the report was received, studied and deliberated upon and a unanimous decision was arrived at to remove Achuba.
The ousted deputy governor fell out with Yahaya Bello, the governor, shortly after they were sworn into office.
At the height of their disagreement, Achuba threatened to sue Bello over unpaid allowances to the tune of N819 million.
He had said the unpaid allowances were captured in the state’s 2017, 2018 and 2019 budgets but that did not bring about a change in the situation.
One week after the assembly commenced impeachment proceedings against him, Achuba told TheCable in an interview that he would have thought members of the assembly were reasonable, but they are not.
He said he was being witch-hunted because of his decision to expose corruption.
“If I expose corruption, and they are suddenly saying that I am the (serpent) of government, then you are part of that corruption. Because if I say somebody has (so, so) amount, and that amount was enough for the man to pay salaries and have overhead and do projects even without screening, and I say with screening, you have (so, so) amount that can do projects and do all that we are crying for, without even the bailout, without the Paris-club refund and all that. And you say it is an impeachment offence, then where are we going as a nation?” he had asked.
ADVERTISEMENT
“I thought ordinarily that being the watchdog of society (the state assembly) would conduct an investigation into what I have said. And it is an irony, indeed, that, I, who is exposing corruption, is the one being served an impeachment notice. Not the person that is corrupt, and for your information I have not been served the impeachment notice, and it is alleged completely.”