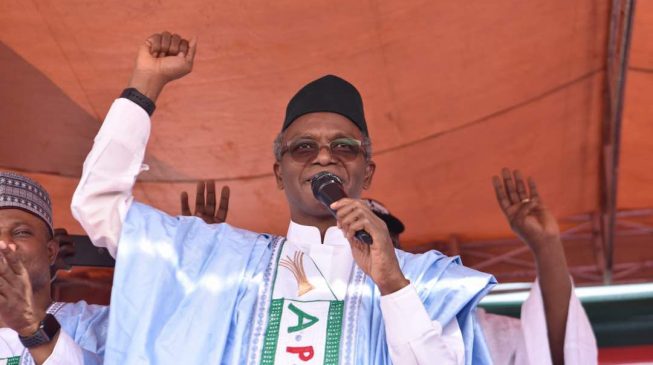 The All Progressives Congress (APC) has inaugurated its national  campaign council to complement the efforts of committees set up for the November 16  governorship elections in Kogi and Bayelsa.
Adams Oshiomhole, national chairman of APC,  who inaugurated the council in Abuja on Friday, said Abubakar Badaru, governor of Jigawa, would chair a 56-council member for Bayelsa, while Nasir el-Rufai, governor of Kaduna, would lead 56 members for Kogi.
ADVERTISEMENT
Oshiomhole, who said all APC governors would participate in the campaign, added that the party would also deploy its “human resources” to Kogi and Bayelsa to deliver the states for the party.
“This inauguration demonstrates the party’s readiness to campaign and contest the election,” he said.
Speaking on behalf of the council, el-Rufai thanked the party’s national working committee for appointing him to lead the campaign council for Kogi election.
He pledged his team’s commitment to deliver the state to the party.
The governor, who said that re-election of a governor was always tougher than fresh election, promised that his campaign council would ensure re-election of Yahaya Bello.
Badaru, who was represented by Abdullahi Ganduje, his Kano counteroart, expressed the council’s readiness to complement the efforts of Bayelsa campaign organisation to ensure victory for the party.
ADVERTISEMENT
The Peoples Democratic Party (PDP) is the major opponent of the APC in both states.
While the PDP is in charge of Bayelsa, the APC is fighting to retain Kogi.