Kukah: Sanusi fighting for his life because he says unpopular things 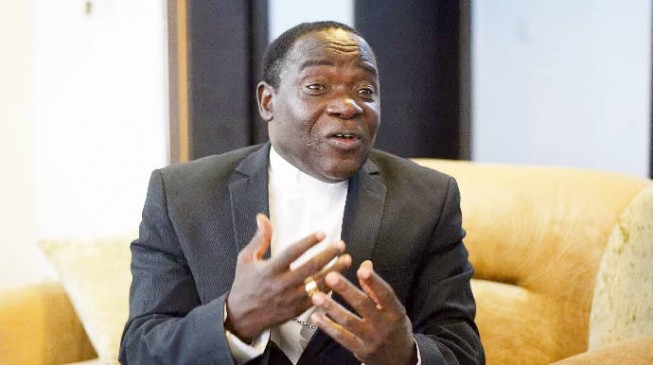 Matthew Kukah, Catholic bishop of Sokoto diocese, says Muhammadu Sanusi II, the emir of Kano, is fighting to keep the throne because of his blunt remarks.
The cleric made this remark on Monday while speaking on a panel at the ongoing 25th edition of the Nigerian Economic Summit Group (NESG) conference.
ADVERTISEMENT
“The emir is here, he is still fighting for his life because of the position that he has taken and all of you sitting here know that it has literally become a matter to a particular course because the things he is saying are not popular,” he said.
Abdullahi Ganduje, governor of Kano state, had whittled down Sanusi’s powers by creating four emirates.
TheCable had reported that the monarch’s problem with Ganduje was linked to his critical comments in 2017 on the award of contracts to Chinese companies by the state government and on the governor’s foreign trips.
Commenting on the state of educational facilities in states, Kukah said governors spent money on pilgrimages and building religious centres rather than on education.
“The money that comes from the centre to our states, who is it meant for?
“When you say education is on the concurrent list, I worry that many of our states are providing opportunities for incubators of hatred to grow. If you take northern Nigeria where there is no single Christian or woman in the state assembly; women are lucky if they become commissioners for women affairs.
“When the federal government says that it doesn’t have a voice in what happens in distant states where governors have taken a license to behave irresponsibly in terms of issues of education.”
Kukah, who claims to have five secondary schools, said 60% of the students in his schools are Muslims.
“I have five secondary schools and I have to rely on the little collection that I receive in my church to send children to school and in many of the schools, 60% of the children are Muslims. Can we have a conversation with the state governments, the answer is almost no.
“The point I am making is that I think Northern Nigeria is a big culprit in a lot of the things that are wrong with Nigeria and I say this with all sense of responsibility.”
ADVERTISEMENT
The cleric said Nigeria has to learn to manage its diversity before it can begin to plan the development of its future.