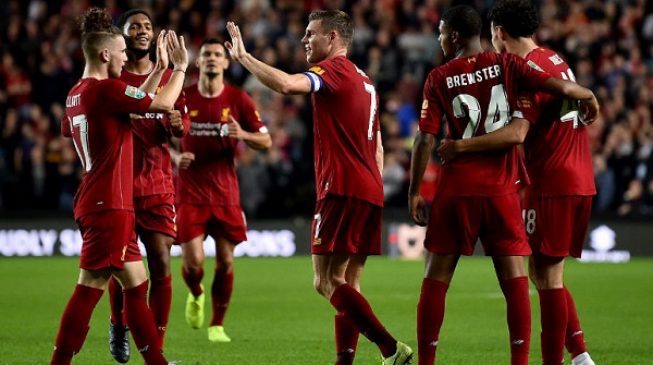 Liverpool triumphed 5-4 on penalties against Arsenal to qualify for the quarter finals of the Carabao Cup after a goalfest that ended 5-5 at full time.
Divock Origi and Gabriel Martinelli both scored braces, and further goals were delivered by Ainsley Maitland-Niles, Alex Oxlade-Chamberlain, Joe Willock and James Milner. Arsenal’s four goals was the third time they achieved the feat at Liverpool’s stadium.
ADVERTISEMENT
It was also the second time Liverpool have conceded five goals in a home match in the last 66 years — the first was also against Arsenal in a 6-3 defeat 12 years ago.
Liverpool started with their youngest squad in two years while there were starting positions in Arsenal’s XI for forgotten men, Mesut Ozil and Shkodran Mustafi.
Both Mustafi and Ozil were quickly in the thick of action for varying reasons.
Mustafi gifted Liverpool the lead on six minutes via own goal. The centre back miskicked Alex Oxlade-Chamberlain’s low cross into his own net.
Arsenal, however, replied with three goals, first the equalizer on 19 minutes through Lucas Torreira. Gabriel Martinelli then scored two predatory strikes to take his tally to seven this season.
The Reds reduced the deficit two minutes from halftime from the spot with James Milner’s well-taken penalty.
The second half continued to rain goals, both teams scoring one each within fifteen minutes of the restart.
Milner’s poor back pass gifted Maitland-Niles his goal, while Oxlade-Chamberlain’s rocket shot from over 20 yards reduced the deficit to one goal.
Divock Origi equalized with a better goal four minutes later. The Belgian striker spurn his marker and arrowed a shot into the roof of the net for a 4-4 scoreline.
Brilliant goals were the order of the day and Unai Emery’s side delivered one of theirs, with Joe Willock curling a beauty into the roof of the net to retake the lead.
Divock Origi equalized four minutes into added time, his volley finding the back of the net for 5-5 at full time.
Liverpool won the penalty lottery, converting all their kicks while Dany Ceballos missed for Arsenal.
In the other big match of the night, Marcus Rashford scored twice to help Manchester United defeat Chelsea at Stamford Bridge. It was United’s second win against Chelsea this season.
Rashford scored the first from the spot after Daniel James won the penalty kick, while the second was a stunning 30-yard free kick.
Mitchy Batshuayi scored Chelsea’s only goal of the game.
ADVERTISEMENT
The League Cup quarter final draws will be held on Thursday.
Results
Liverpool 5-5 Arsenal (Liverpool win 5-4 on penalties)
Chelsea 1-2 Manchester United
Aston Villa 2-1 Wolves