Losing weight to save Nigeria 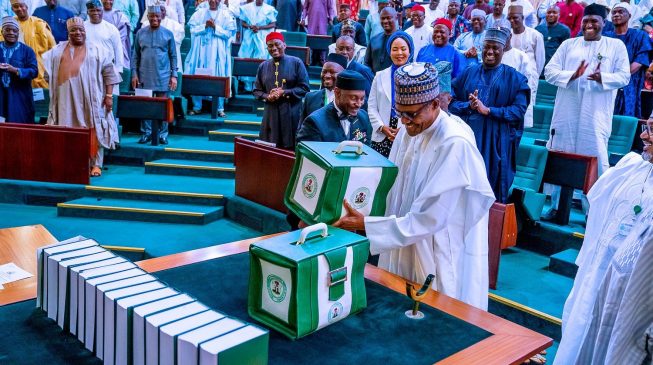 ONITSHA ‘GENOCIDE’
Tragedy visited Onitsha on Tuesday night when a tanker exploded, killing people and razing over 100 shops. Never one to miss an opportunity for political propaganda, the Indigenous People of Biafra (IPOB) issued a statement describing the incident as a “terrorist attack” designed to wipe out “Biafrans”. This is also called “genocide”. Tanker fires have occurred in Ekiti and Benue this year alone, while Lagos has also witnessed horrendous incidents. Those ones were probably “designed” to wipe out Yoruba and Tiv people. In January, the Yan’Katako Market in Rijayar Lemo area, Kano state, was razed, perhaps to wipe out Arewa people. Nonsense.
CONSENT GAME
The Code of Conduct Bureau (CCB) says it cannot make public the asset declarations of past and present public office holders because it does not have their consent to do so. There is no provision in the Code of Conduct law requiring such consent. Maybe the national assembly (don’t laugh) should amend the law to give CCB the powers to go public. Also, did CCB get the consent of Justice Walter Onnoghen, the former chief justice of Nigeria, before making his assets form available to the petitioners? In the past, CCB came up with the excuse that public officers could become victims of armed robbery if their assets were made public. The latest excuse is amusing. Absolutely.
BORDER CLOSURE
Nigeria has taken the abnormal measure of closing its land borders in order to curb smuggling — with the Nigeria Customs Service announcing that all imports and exports, “illicit or non-illicit”, are banned through the route “for now”. Many Nigerians are unhappy over this development, which they hold responsible for rising food prices. For me, though, the problem is not whether people are suffering from the border closure — there will always be winners and losers — but how long we can sustain this. When we re-open the borders, surely full-scale smuggling will resume because the security agencies are clearly complicit. So what problem would we have solved? Intractable.
ADVERTISEMENT
KANO ABDUCTIONS
If you are a regular reader of Nigerian newspapers, you would be forgiven for not having heard that nine Muslim children were abducted from Kano, taken to Anambra state and forcefully converted to Christianity. It did not make any front page (to the best of my knowledge). No columnist wrote on it. No editorial followed. It was a non-issue. Let’s now reverse the equation and say nine Christian children are abducted in Anambra, taken to Kano and forcefully converted to Islam. How would the Nigerian media treat the “jihadist” story? I sincerely think the time has come for us to have an honest conversation with one another in the Nigerian media. Introspection.

This article was first published on TheCable and written by Simon Kolawole.