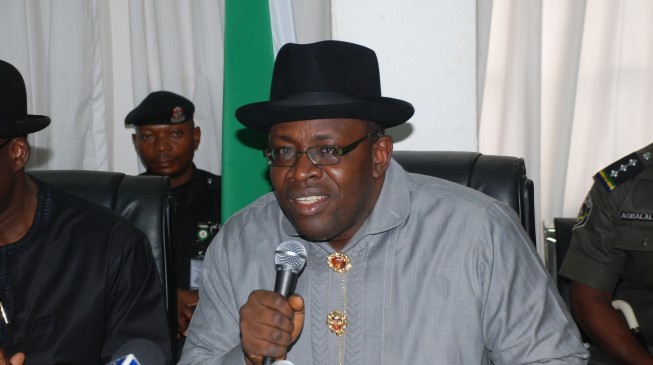 At least 10 members of the cabinet of Seriake Dickson, governor of Bayelsa state, have resigned.
Their resignations come barely a month to the state’s governorship election scheduled to hold November 16.
ADVERTISEMENT
Among those who resigned are Markson Fefegha, commissioner for mineral resources; Ombu Napoleon, senior special assistant to the governor on community development; Iniruo Ipogi, special assistant on student affairs; Stephen Diver, special adviser on inter-party affairs; and Natus Zebakame, special adviser on culture.
In his resignation letter dated October 2, Fefegha said he decided to quit the cabinet “after a period of deep reflection”.
Fefegha, who had been serving in the administration since 2012, said his exit from Dickson’s government will take effect from Friday, October 18, 2019.
Describing himself as one of the “first eleven” in the cabinet of Dickson, Fefgha blamed his exit on “political uncertainty and other reasons personal to me”.
He added that “as the Holy Book says; there is a season and a purpose for everything under the heaven.”
Fefegha is the first commissioner to leave Dickson’s cabinet since political appointees defected from the Peoples Democratic Party (PDP) ahead of the governorship election.
In another letter dated October 16, Napoleon whose resignation appears most recent, said his reason is personal.
ADVERTISEMENT
On Friday, the governor had appointed 60 aides which he said would “help his government finish well.”