Ndume: Boko Haram has killed over 840 soldiers in Borno 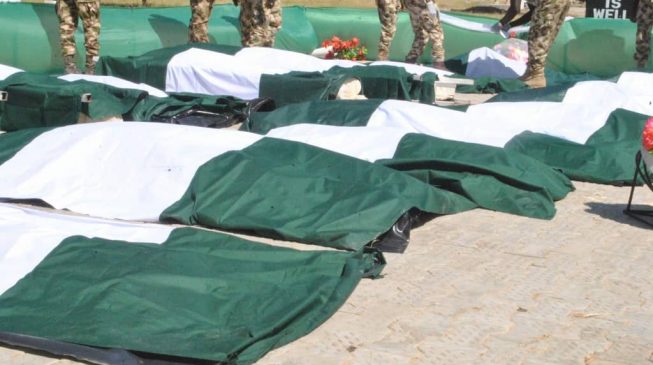 Ali Ndume, chairman, senate committee on army, says the Boko Haram sect has killed 847 Nigerian soldiers from 2013 till date.
He said the deceased officers were buried in the military cemetery located in Maiduguri, Borno capital.
ADVERTISEMENT
Ndume said the figure did not include soldiers killed by the insurgents but buried in other military cemeteries.
The lawmaker addressed reporters after his committee returned from a trip to Borno.
He said during the visit, the committee members discovered that soldiers were under-equipped to confront the insurgents.
Ndume also said the number of soldiers confronting insurgents were inadequate, calling on the government to recruit more troops.
He said the senate panel was already investigating allegations that some non-governmental organisations were working with Boko Haram.
ADVERTISEMENT
In September, the army blacklisted Mercy Corps and Action Against Hunger, some international NGOs, and shut their offices in the north-east.