Nnamdi Kanu: I’m ready to face trial in Nigeria if my safety is guaranteed 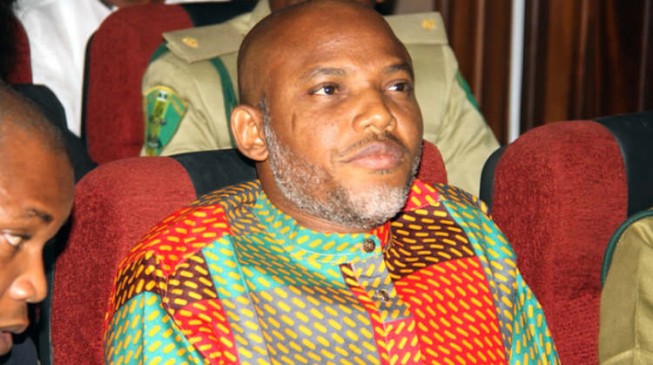 Nnamdi Kanu, leader of the proscribed Indigenous People of Biafra (IPOB), says he is ready to face trial in Nigeria if his safety is guaranteed by the court.
Kanu spoke through Ifeanyi Ejiofor, his counsel, on Thursday, at the federal high court in Abuja.
ADVERTISEMENT
Ejiofor told the court that they had filed an application to restore the IPOB leader’s bail so he could continue his trial.
“We have an application for bail filed on April 1, 2019. The application was served on the prosecution and it is due for hearing,” he said,
“We urge the court to restore his bail on the ground that the court will guarantee his safety when he comes back to the country to continue his trial.”
Labaran Shuaibu, counsel to the federal government, told the court that he had just seen the application, and he opposed it.
Shuaibu asked the court to adjourn the matter to enable him to file the necessary processes.
Binta Nyako, the judge, said the only way he could guarantee Kanu’s safety was to keep him in prison. She said even judges are no longer safe in the country.
“Even judges are being abducted in the country. So prison is the only safest place for him,” she said.
The judge adjourned the matter till January 16, 2020.
The court had ordered the arrest of Kanu for jumping bail.
It also revoked the bail, which it granted the IPOB leader in 2017, and held that the trial will continue even in his absence.
ADVERTISEMENT
Kanu is facing charges of treason. He escaped to London after soldiers attacked his family’s residence in  Umuahia.