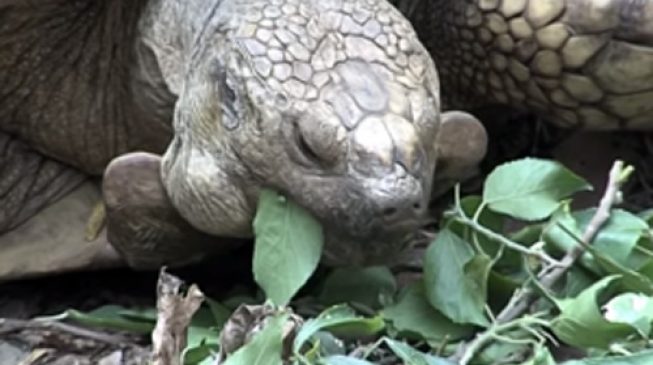 In the early 1970s, when Nobel Laureate Wole Soyinka wrote his play, Death and the King’s Horseman, he embalmed a portion of Yoruba culture which suggests that there is a connection between the world of the living, the world of the dead and the world of the unborn.
Based on real events, Soyinka narrated how it was a norm for Elesin Oba, known as the king’s horseman, the king’s horse, and the king’s dog to all die in a suicide ritual after the king’s passing. The trio — Elesin Oba, the horse and the dog — were expected to go on to serve the king in the afterlife.
ADVERTISEMENT
But in Ogbomoso, outside Soyinka’s play, one king’s tortoise, who connected all three worlds presented by the Nobel laureate, defied these odds to become the most popular animal in southwest Nigeria today. This animal is none other than the great reptile of Ogbomoso, fondly called Alagba (elderly) — for his length of years.
Alagba was reported to have been brought into the palace by Isan Okumoyede, the third king of Ogbomoso who reigned from 1770 to 1797. This tortoise has gone from being a king’s pet to being a companion for kings, and he is eventually on his way to becoming a deity in the history of the kingdom.
In connecting Soyinka’s worlds of the dead, the living and the unborn, Alagba served the dead, Oba Okumoyede and many other kings; he entertained the living, many tourists who came visiting from across the world; and he would serve as a golden point in the history of Ogbomoso for many yet unborn. 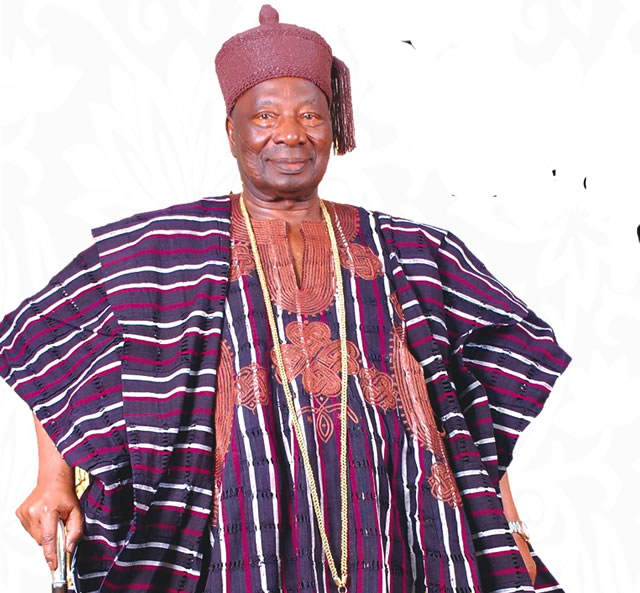 Jimoh Oladunni Ajagungbade, Soun of Ogbomoso
Adedeji Atiba, an Erastus Mundus scholar in Poland who hails from Ogbomoso, says Alagba “was more than an animal… he was a symbol of the Ogbomoso township”.
Atiba, who is currently in Spain, told TheCable that anywhere he goes and tells people he is from Ogbomoso, they ask him if Alagba is still alive before they ask about the wellbeing of the king.
“I don’t know how to explain it. But one could say he was almost as popular as the king,” Atiba told TheCable by phone.
“When you tell people you are from Ogbomoso, people will ask you about the veracity of the fact that Alagba is 300+ years old. Then they will ask if it is still alive before they ask if our king is alive.”
Alagba may have outlived many kings, but the king who is said to have catered for him the most is the only king of Ogbomoso in the last three centuries to have outlived the elderly one.
Toyin Ajamu, the private secretary to the soun (king) of Ogbomoso, Oladunni Oyewumi, said his principal used private resources to cater to Alagba during his lifetime.
“Alagba had lived in the palace for centuries. The tortoise played host to many monarchs in Ogbomoso in the past,”Ajamu said.
“Alagba became popular because Oba Oladunni Oyewumi used his personal resources to cater for her well being. The tortoise had two staff members of the palace, dedicated to her.”

Samuel Ojo, one of the dedicated carers, said in a 2018 interview that he had taken care of the tortoise for many years and knows what goes on in the palace.
Speaking on what his food routine, Ojo said Alagba “eats every food eaten by any Omoluabi (Yoruba for person of honour)”. He loved pounded yam.
“Alagba eats rice, pounded yam, amala, sweet drinks, and fruits, such as pawpaw, water melon… basically anything Omoluabi eats. In addition to this, he eats grass. We human beings also eat grass, but our grass is vegetable, ewedu, and so on,” Ojo said.
“There is no food you give him, no drink you give him that he wont take.”
“According to the history we heard, this is about the 20th king he is serving, and one of the oldest, and longest ruling monarch is the current king Oba Jimoh Oladunni,” Ojo said in Yoruba language.

‘DRINKS WATER ONCE IN TWO WEEKS’ 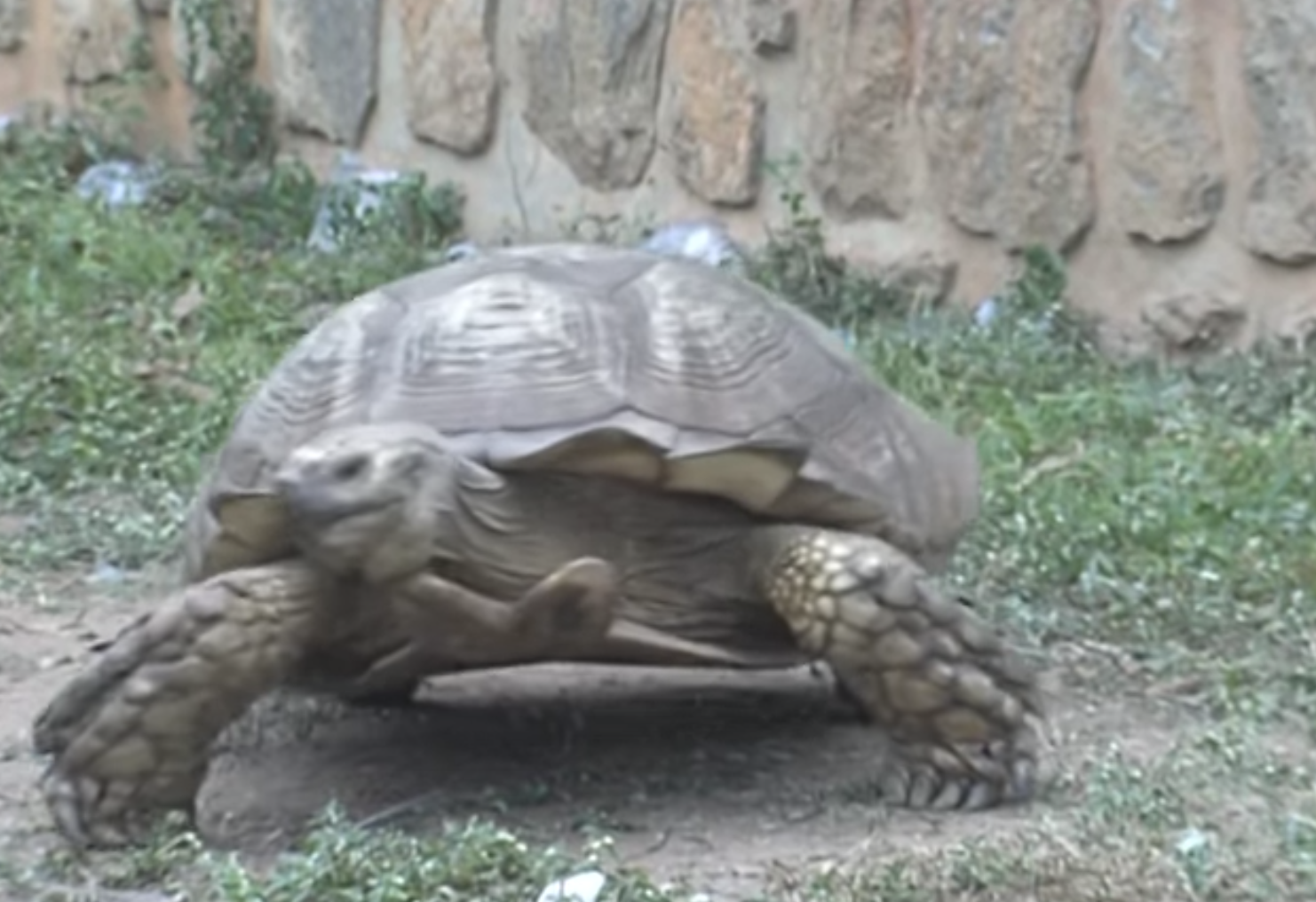 Alagba loved tourists
Oladimeji Olaleke, one of the king’s stewards who also catered to Alagba, added that old one has a bath every Saturday, and drinks water only once in two weeks.
Olaleke, who carries the king’s umbrella, said “there is nothing he does not eat, he eats what we eat, and he drinks water only once in two weeks. Once. And twice in a month”.
“When wants to drink water, he comes to the palace entrance, that’s the cue we get when he wants to drink water. He would drink about four litres of water, and in 15 minutes, he is done drinking it.
“We bathe him every Saturday,” he added.
Ismail Adedokun, another king steward who was born in the palace, said the tortoise has become very important in the entire Yorubaland.
“If we look through all the palaces in Yorubaland, this manner of animal is scarce. As we are here now, if he does not approve of this interview, he won’t accept being filmed, he would retract into its shell,” Adedokun said.
He added that Alagba, who has become a significant symbol in Yorubaland, loves having children and tourists around, and gets really playful when any of them come visiting.

HOW OLD WAS ALAGBA? 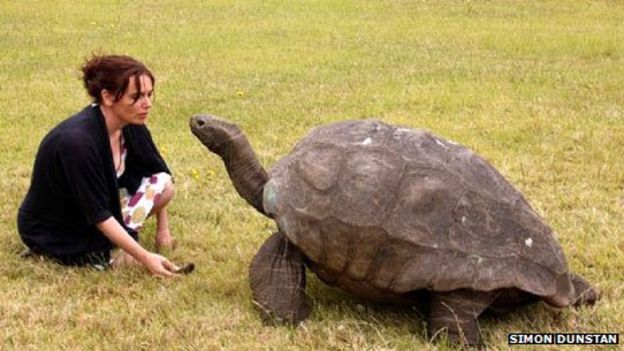 At 187, Jonathan, a giant turtle, is regarded in the west as the world’s oldest animal.
Before his death, there had been many questions over Alagba’s age. While the palace claimed he was over 300 years old, the west said historical records suggest otherwise. To make a questionable matter worse, the palace has no certain age for him.
A 2011 report by NTA News24 claimed that the tortoise was 330 years old, suggesting he would have been 338 years old at the time of death in 2019. Sadly, in that same bulletin, the reporter — in what looked like a slip — said that the tortoise was 325 years old at the time, creating more doubts around the specific age.
The king’s stewards in the same palace said in 2018 that the tortoise was 347 years old in 2018, making him approximately 348 as at time of death.
The king said at the time that the tortoise was more than 300 years old. He added that for about 60 years that he had been close to the tortoise, the reptile had only taken ill once. Once in 60 years.
The second illness in 68 years has proven fatal.
Reptile curator and experts told the BBC, that it is unlikely for Alagba to have been as old as 300 years. They claim that tortoise live for about 70 to 80 years, or 100 at best, adding that the giant tortoise could live up to 200 years — but Alagba was no giant tortoise.
BBC says the oldest tortoise and animal in the world is believed to be Jonathan, the 187-year-old giant tortoise who lives in St Helena.
Palace history says Alagba reigned with Isan Okumoyede, who was king in 1770. If Alagba was born the year Okumoyede took the throne, he would be 249 years old in 2019. If he was born the year Okumoyede died, which is very unlikely, he would have been 222 years old, making him older than Jonathan on both accounts, and the oldest animal in the world.
Worthy of note is the fact that Jonathan’s carers do not know his exact age — they began counting the years when he was brought to St. Helena. He is originally from Seychelles. Adwaita, another Seychelles tortoise who lived in Kolkota, India, was said to have lived for 255 years.
Based on palace estimates, Alagba would be between 300 and 348 years old. To be near exact, some carbon dating may be required.
Even in death, Alagba is still fighting for his place as the oldest being of the 21st century. 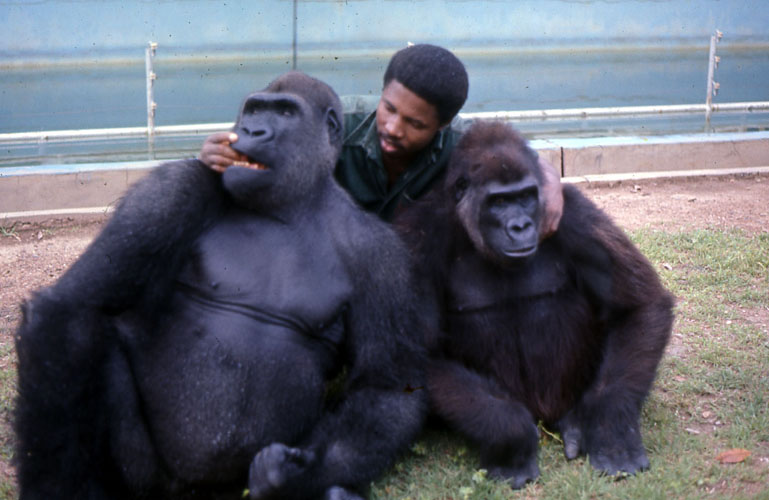 Aruna and Imade in 1973. Photo Credit: Bob Golding
Are the most popular animals in Nigeria all dead? Yes and no — it solely depends on who you are asking. In 2006, the University of Ibadan Zoological Gardens lost Imade, its most popular gorilla, who had lost her husband, Aruna, in 1995. Both have been embalmed and are on display at the zoo.
Like Imade and Aruna, Alagba is gone — but his memories are with us.
Before Soyinka, Daniel Fagunwa, better known as D. O. Fagunwa, reputed as the pioneer of Yoruba-language novels, also spoke of animals and the afterlife many times in his novels. In fact, Ologbo Ijakadi, one of the main characters in Fagunwa’s 1949 novel Ireke Onibudo was described as a tough and cunny animal who was like a fox but had the shell of a tortoise.
ADVERTISEMENT
If there is an afterlife for animals as the culture suggests, Alagba will be in heaven with Imade and Aruna for their service to Nigeria, while Ologbo Ijakadi will be burning in hell — for its disservice to humanity. Fagunwa and Soyinka have to be right.
Goodnight Alagba!